Fanon Wiki
Register
Don't have an account?
Sign In
Advertisement
in: Pages owned by users, Alloys, Weapons,
and 4 more

Zedylrian Steel, sometimes known as Z-steel, is an alloy that was first forged in the days of the mighty Zedylrian Empire. It is an indestructible and, in the case of weapons, immensely sharp alloy. When fashioned into bladed weapons, the steel can hold an especially keen edge, remaining sharp forever without the need for honing.

Aside from its sharpness, in the case of weapons, Zedylrian steel is recognizable by its unusual dusky color, a barely visible "aura" that it appears to give off, along with its strength and light weight in comparison to ordinary steel, as well as a distinctive humming-ringing sound it makes when struck with enough force, similar to a tuning fork.

Zedylrian steel began in the ancient Empire of Zedylria. Some 4,500 years ago it was the grandest empire on Qirsyllviar, once controlling swaths of territory, primarily in Northern Eurodysia.

The original creator was a Zedylrian alchemist named Waldorfran, who hoped to raise his status in the empire with his creation. Instead, he was imprisoned and forced to teach others how make more of the steel he invented, eventually producing enough weapons and armor for entire armies. The use of this special alloy allowed the Zedylrians to use indestructible armor and weapons to conquer their rivals with minimal effort despite fierce resistance.

For many years the Zedylrian Empire kept the method and formula for forging Zedylrian steel a closely guarded secret while keeping Waldorfran in captivity. But, after the original creator sold the method to escape his captivity, the alloy became the instrument of the Empire's destruction.

After the Fall of the Zedylrian Empire, Waldorfran, too proud to destroy the secret, hid the formula and method for forging Zedylrian Steel in hopes that no one would find it. He then killed everyone within whom he confided the method, along with anyone else who knew the secret, and committed suicide without ever telling anyone where he hid the formula and method. Regardless, the many thousands of nearly a million Zedylrian steel weapons, armor and items soon fell into random hands.

Fortunately, most of the blacksmiths who tried to create more either failed to do so or ruined the steel trying to reforge them into new items. Consequently, the number of true Zedylrian steel items dropped from a few million to only a few thousand by the 46th Century ᴘᴄᴢ.

Those who know how to actually make more are nonexistent, save for one known exception: the only known person who successfully create a fresh new item of Zedylrian steel after the Fall of Zedylria was the future Tenno of Yamatai, Shintoki-Tenno (personal name: Yoshishige), through the creation of Seishitsu, but even then the method and formula was not recorded.

Common legend says that Shintoki-Tenno allegedly discovered the method after a traveling to an old site of former Zedylria, copied it, returned the original to its resting place, and then destroyed his copy after creating Seishitsu; but, as there's no proof, and Shintoki-Tenno never divulged the secret of how he made Seishitsu, most historians dismiss the allegation as fiction.

Zedylrian steel is near indestructible, capable of taking on even the hardest of materials without breaking. Its hardness also makes it immune to the passage of time, so Zedylrian steel weapons keep their sharp edge eternally without need for sharpening… although some owners will still hone it, even if just out of habit or respect. Although, while nothing cuts like Zedylrian steel weapons, even this resilient alloy can't cut through everything.

Zedylrian steel is also magic-resistant, one of the few materials known to be, and is capable of deflecting spells; although the metal can still be enchanted or infused with magic, giving it extra abilities by turning it into a magical object.

Zedylrian steel has a very high melting point, requiring immensely hot temperatures in order to work or reforge. This makes it extremely heat-resistant, and thus doesn't take damage from normal fire. Some speculate that dragon fire, one of the hottest forms of fire known, was required when the metal was first invented, but this has so far been declared a myth. Regardless, such temperatures to work the metal are still achievable through other means.

Zedylrian steel has been forged into many well-known items, weapons and otherwise, since its invention. Such things are more common in the Eurodysia and Aquilonis, and less so in the other lands. Zedylrian steel items and weapons have scattered across the world quite a bit since the end of the Zedylrian Empire; but even so; such items are so rare in Nekcroz, Tarak, Marlakcor and Maritymir, that even the smallest piece is treated with reverence. 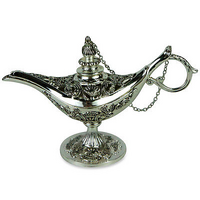