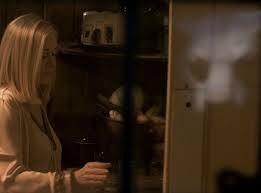 The flim opens up with a man in  the shower and a girl reading outside. When the man gets out of the shower a person in a Lion mask slams his face into the mirror and stabs his head a couple of times killing him and two people in a Crocdile mask and a Hippo mask chase the girl and hack her to death with there axes.

The Ludwig family is on there way to Rav and Darnell's remote vaction home for the week and to see the blue moon. The family arrives and gets settled in there rooms. The family talks about what they've been doing over dinner and then they go outside to see the blue moon. While everyone is getting ready to go to sleep Chad stays in the kitchen eats some cookie butter not notcing that a three people with animal masks are watching him. A Lion, Hippo and Elephant are the masks they are wearing.

Chad thinks the grauge is open and goes down to check and finds it open. He shuts the grauge and goes upstairrs unaware that Hippo was wallking behind him. Emma, Thomas and Mike comes upstairs and Chad tells them that the grauge was open. Lion looks into the window again and Emma sees this and screams and yells. The others come upstairrs and Emma tells them what she saw. They all go outside and into the frontyard and don't see anybody.

Gary is then shot in the leg with a bow and the arrow shocking evryone and they see Lion, Hippo and Elephant out in the yard. Lotty grabs Gary and they all run inside just as Elephant shots a bow into the door. Emma, Angelina, Avery, Chad and Mike lock all the windows and doors. They are afraid to lock the celler doors so they lock the basement door instead not telling the others. They go back to the kitchen where Rav is pulling the bow out of Gary's leg and treating his wounds.

Troy tells them that they have to kill those people in the woods. Sherry goes upstairrs and crys in the hall unaware that Elephant is walking up behind her. Sherry walks into her room and see's Elephant as he is about to stab her. Sherry opens the window and hides under her bed just as Elpehant broke the door down. The others go into the basement beacuse Rav and Darnell has weapons down there and unaware of what's going on upstairrs.

Hippo jumps out the window and Sherry comes out from underneath the bed and runs out of the room only to run into Lion. Sherrry runs back into the room and tries to lock it but Lion pushes the door open and throws her out the window. Sherry lands on Rav and Darnell's Jeep. The otheres heard a window break and go back upstairrs. Lion moves the dresser aginst the door. Rav and Brittany go upstairrs to Sherry's room and ask if she's alright. The Lion talks in her voice saying that she's okay and she needs a minuent.

Sherry wakes up still alive and rolls off the car. Sherry has her keys and limps to her car and gets in. She puts the key in the igntion and tries to start the car but it wont start. She gets out and checks the tries and sees that there slashed as well as the others. Sherry gets back into the car only for Elephant to stab her through the seat. Hippo breaks the car windows and stabs Sherry to death. Troy goes to check on Sherry and finds the door locked. He breaks the door down and find the window shatterd and looks outside.

Emma see's Lion come through the study and gasps when he accidnetly knocks into something. Emma gets up slowly as the floor begains to give away. Just as Lion finds the secrect passage Emma falls through the floor and into the laundry room. Lion jumps down and raises his axe to kill her but Troy hits Lion in the head with a wooden padle. Emma wakes up and she and Troy run outside as Elephant chases them. Darnell and Chad come out of there hiding place and find Angelina.

While in the woods Troy tells Emma to run in a diffrent direction and she dosen't want to leave Troy but he tells her too and she runs and falls into the little dam that the Ludwigs built. Emma hides behind the water abel to breath. Troy makes it to a shed and hides in there. Troy looks outside and see's a refelction of Elephant behind him. Elephant slams his face into the window and stabs him in the face with an axe killing him. Lotty and Missy brings Gary upstarirrs and puts him in his bed locking the room.

Angelina goes upstairrs and see's a blood trail and follows the trail into Brittany's room. Brittany and JJ come out of the closet scaring her. Angelina leaves the room and Brittany flowls. JJ is about to leave the room when he see's a hand under the bed. Gets down to the floor and looks under the bed. The hand grabs his face and pulls him under the bed witnissed by Angelina and Brittany who comes back. They try to help him but splatters of blood shoots out and they run. They run into Chad and Darnell. Gary starts crying and Elephant sneaks into the room and stabs him to death with a machete writting in blood.

Emma thinks that the masked killers are gone and crawls outta of the dam and walks back to the house. Abigail comes out and scares her. They here the wind chimes move and see Lion standing by the wind chimes and they run inside with Lion behind them and he grabs Abigail and throws her into the kitchen. Abigail crawls but Lion stabs her in the head with an axe killing her. Emma runs into Chad, Darnell, Brittany and Angelina and they tell her that they need to get to the neighbor's house.

Emma says she dosen't want to leave her family and they need to find the others. Missy gie sto check on Gary and finds him dead. She here's something under the bed and a hand grabs her leg and she steps on it and Hippo comes in the room and Missy jumps out the window and lands on the ground. Missy runs into the woods unaware that Lion is following her. Missy runs to the neighboor's house

Retrieved from "https://fanon.fandom.com/wiki/You%27re_Dead?oldid=189961"
Community content is available under CC-BY-SA unless otherwise noted.