"Every year is a crocodile year!"

Year of the Crocodile is a show that revolts around a Mugger Crocodile (Crocodylus palustris) named Count Desertstone, and takes place in the Everglades.

Alligatorlong- A female Chinese Alligator that lived in China, but was smuggled to the Everglades, and escaped. She gave Count a clover blanket, which in return he gave her a chinese dragon blanket. She gave Count the idea of "Year of the Crocodile," and is Count's best freind.

Finch- A male Spectacled Caiman that was captured, brought into a pet store, bought by a scientist, and released into the Everglades, were he met Count, Alligatorlong, and Storm. Finch had no name, but was named by Hulton when he saw a finch has big as the caiman.

Storm- A male Gavial that swam across the Atlantic Ocean and made it to the Everglades in a thunderstorm. Storm became best freinds with Finch when he came. Storm is very good at tricks, and is called a "Pencil Nose" by Execeir.

Scalor (Otherwise known by his full name, Scalor Starshard)- A male Saltwater Crocodile and is king of the crocodillians. He founded the small kingdom of crocodillians and usually makes fun of Execeir, like calling her "Ink Tip" and "Feathered Goblin"

Execeir- A female flamingo and a antagonist of the series. She tried to eat Count when he was a hatchling, and has tried to take over the Crocodillian order of animals ever since. She got killed in the last episode, when the crocodillians surrounded her and Count came and bit her neck. As she fell, all the crocodillians jumped on her, and ate her. Her bones were kept in Count's waterhole, as a memory of his most important kill.

Grettir- A male Mugger Crocodile and the main antagonist of the series. He is leader of the Pure Crocodiles, a group of crocodiles that are cannibals, killers, and egg smashers. They murdered Zumba and Scorch, Count's mother and father, and ate Latern, Count's brother, when he tried to gaurd Count.

There are a few words that only the crocodillians use;

Mutafish- A word for a fish that survives a crocodile attack; a large insult to fish.

Scroomrep- The ghosts of a dead crocodillian that had unfinished buisness on Earth.

Pencil Nose (Execeir-Speak)- Another word for Gavial; a major insult and a curse to crocodillians.

Ink Tip (Scalor-Speak)- The black tip on a flamingo's beak.

Soundrum- An object that a crocodillian uses that makes tons of sound.

Balilsk- A type of lizard that runs on water; an expression when a crocodillian does something amazing. 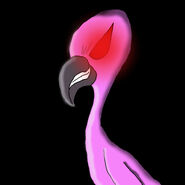 Grettir
Add a photo to this gallery
Retrieved from "https://fanon.fandom.com/wiki/Year_of_the_Crocodile?oldid=216306"
Community content is available under CC-BY-SA unless otherwise noted.