Xiaolin Showdown is a 2014 action comedy drama fantasy film based on a TV series, starring

Four young monks – Omi, Kimiko, Raimundo, and Clay – are forced into cooperation at the Xiaolin Temple after learning they are the Chosen Ones, monks chosen to become Xiaolin Dragons. At first things are difficult, but soon they become friends and are able to work together to search for Shen Gong Wu. Along the way, they must battle the bumbling Jack Spicer, "evil boy genius", and the Heylin ghost-witch Wuya, who Jack accidentally frees from a 1500 year imprisonment in a puzzle box. Through thievery, Spicer eventually possesses enough Shen Gong Wu to form Mala Mala Jong, an ancient monster that Wuya uses to help her gain control of the world. Raimundo defies orders and fights the monster, causing the remaining monks to fight and defend the remaining Shen Gong Wu in the Temple's possession. All the monks, except for Raimundo, are promoted to Xiaolin Apprentices due to their bravery. Enraged and humiliated, Raimundo joins the Heylin side as Wuya's new assistant and helps her regain her human form. 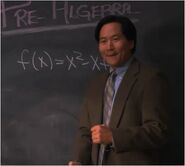 Master Fung
Add a photo to this gallery
Retrieved from "https://fanon.fandom.com/wiki/Xiaolin_Showdown_(Live_Action_Film)?oldid=494267"
Community content is available under CC-BY-SA unless otherwise noted.