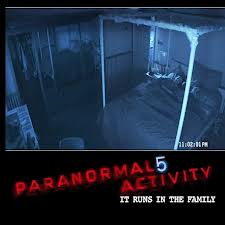 Brittany Blaze gave birth two weeks ago to baby Kaylee and Dave decides to tape his new child Kaylee. Brittany and Dave live with there two teenage sons Jasper and Caleb and there little kids Natasha and Bree. Caleb is jeaouls of new baby Kaylee and the other kids. On the first night the closet door slides open and a shadow is seen walking to Kaylee's crib. Dave looks to see what Kaylee did and sees the closet opening on it's on and a shadow walking to Kaylee. Dave shows everybody this and Caleb giggles like it's funny.

That day Kaylee screams and Brittany and Dave run to her room and see a bunch of shadows in her room and they disapper. The next day Caleb calims he saw a tall dark man waking around the house last night. Dave and Brittany don't believe him which makes Caleb mad. He takes the video camera and goes in his room and talks to someone off camera saying that they don't believe him. A deep voice says you have to show them to me later on in the night.

When Dave starts turning the lights out Caleb tells him that there was something in the kitchen. Dave goes into the kitchen and looks around and a dark figure jumps out at him and disappers. Dave tells Brittany and Brittany says that there making it up. The next night the sheet is suddenly ripped off of Jasper. Jasper throws the sheet on the ground and turns around on his bed. He goes to sleep and footsetps are heard then he thrown off his bed and dragged in front of Brittany and Dave who were having sex in the living room.

Brittany is shown the next day talking to a group of girlfriends talking about a tall dark demon. Brittany pulls out a huge  star necklace out of her drawer. The same one that Kaylee had before.

Retrieved from "https://fanon.fandom.com/wiki/Video_Camera_9?oldid=188360"
Community content is available under CC-BY-SA unless otherwise noted.