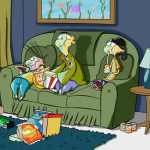 Hi, welcome to Fanon Wiki! Thanks for your edit to the Nick and Jerrick: The Movie page.

If you need help, and there are no local admins here, you may want to visit the forums on the Community Central Wiki. Looking for live help? Then join us for an upcoming webinar to chat with staff and other Wikia editors. You can also check our Staff blog to keep up-to-date with the latest news and events around Wikia.

OK, we can work with plot too. One thing you need to know, don't mess up, OK? If anybody add something, don't deleted it, let me change me.

If you add something in Tom and Jerry (Live Action Film), that is fine. Don't mess up the page

You can work on Quotes too

Or asks the user who make the page

That is OK, let you wanted to do it on your own with transcript, that is fine with me, Tom and Jerry movie is your page not mine page. I think you can do this without my help because you are very good with plot.

Hi, can I get some help?

Can you add photos for the movie settings? like Mrs. Tara's place or something? Can I get a little help from it?

Hey can I help you?

I put vomit scene then toilet scene without the vomit. (Ednasharon24534)

Can you keep Tabitha Smith's period and I don't have Tabitha to have diarrhea, I wanted her to have huge period. (Ednasharon24534)

OK! Some poop with huge period, only a small change I am doing, only small, OK? (Ednasharon24534)

Another wikia to use

OK, so is are you going to put Tyler and Hayley Dalton in third movie because I was thinking a idea for third movie.

OK, I keep my idea safe until you need it and asks 82.14.62.39 (A Wikia contributor) because they was the person to put using other fanon wikis, not me.

OK! Deadly Prank is a crime thriller film and the story is Two identical twin brothers accidentally made a prank on a NYPD detective and they are mistake as assassins. (Ednasharon24534)

Deadly Prank is a thriller not a comedy (Ednasharon24534)

Can you join my wiki

Do you need my need to find actors or actresses? (Ednasharon24534)

Can I find a actor to play Cillian Darcy in Fours Beyond Time: 4 versus Animatronics for the Future? (Ednasharon24534)

Can we do Tom and Jerry: Mystical or continued to work Mystical (film franchise)? (Ednasharon24534)

But I am doing the crossover, can I still work with Mystical (film franchise) and their other films. (Ednasharon24534)

You sure you add the rest of the plot

I'm Sorry About That.

Can you please don't add Emma Watson on Tom and Jerry: The Final Chapter because Bailee Madison is going to return on the 3rd film and the opening should be this:

The film opens that Lisa and Timmy are in a restaurant and Timmy broke up with her. Angered, Lisa goes home, crying, ends up watching Addicted to Love and Alex tells her a penny for your thoughts. The next day, Lisa receives a letter and she learns that she have been accepted by the Stanford university. Exited about it, she tells Hank, Penny, Marie, Allison and Tyler to take care of Tom and Jerry while she's gone.

Can you please stop adding Emma Watson in Tom and Jerry: The Final Chapter because it will be a mess. Delsakrista (talk) 09:25, February 5, 2015 (UTC)Delsakrista

Hi! Can you please vote this poll:

At first the producers of The Christopher Show saw your contribution with the Danny singing episode and rejected it. They reviewed it over and it will now become a Season 13 episode. Thanx, and keep up the good work.

New Ideas For The Christopher Show

Y'know, The Christopher Show is a real show that Chris6d makes with me and a whole team of guys. So everything about The Christopher Show you see on this wiki is real. New ideas always help, as long as they fit the style of the show. So if you have more ideas you can alert me and I'll add them to the page, and if you have any other friends on this wiki, spread the word, 'cause the more help the better.

If you want to edit the List of The Christopher Show Episodes page, please use the classic editor as for some reason, the visual editor makes it look very distorted. That's why I use the classix editör.

Message from Delsakrista, Delsakrista says to stop editing her Tom and Jerry films because the story of the films are about Tom and Jerry first meet up and form their rivalry until they got lost in Chicago and seeks help to Lisa in order to save them from Connor and Stella.

That what Delsakarista say to me in talk page [[3]] and tell you to stop editing her Tom and Jerry films. (Ednasharon24534)

The VisualEditor Messes Up the Page

I'm sorry, but when editing the List of The Christopher Show Episodes page, please do not use VisualEditor as it fatally messes up the page to the point of your actions getting undone. Thank you.

Sorry about the Tom and Jerry films but you can edit them but don't mess everything (including by adding Cillian Darcy's incarnation and others). Delsakrista (talk) 12:32, March 19, 2015 (UTC)Delsakrista

Can you add more cast for Deadly Prank? (Ednasharon24534)

OK if you will change the plot, the name of the name and everything. Make it as The Simpsons Movie 2 or something different. (Ednasharon24534)

OK but I like the plot to be different. (Ednasharon24534)

Who will played Lorcan in Cillian Darcy Beyond: Joy of Sect? (Ednasharon24534)

Can Lorcan appears with himself wrapped in bandages? (Ednasharon24534)

I got one question. Who is Lorcan Darcy? (Ednasharon24534)

Why? An another toilet themed film? Are you obsessed? (Ednasharon24534)

Doing another articles, I am bit busy. I am going different thing in the wikia. (Ednasharon24534)

I will think about it. I am busy with other stuff. (Ednasharon24534)

I was sort out your page, some mistake to fix. (Ednasharon24534)

It is better that you do the quotes because you made the movie but I will help out. (Ednasharon24534)

Hiya! Since you commented about whether there would be a sequel to Prodigy I was wondering what you thought of that sequel, The Face Behind the Smile. Cossack09 (talk) 12:00, November 8, 2017 (UTC)

Hey, CLT, you're like a veteran on the Fanon Wiki, so just letting you know that in case you haven't already seen, this wiki has an unofficial Discord server, so if you have Discord, I'd encourage you to join. If you don't have a Discord, I'd encourage you to make one, as it's free and epic. If you want to join the server, you can do so by clicking "Connect" in the Discord window on the Main Page of this wiki. If that doesn't work, tell me your Discord username and tag and I'll DM you the invite. Thank you, Chris6d (talk) 19:36, June 8, 2018 (UTC)

Re: I've learned my lesson

Buy my book and spread the word

I am not too sure. I mean I only watched first two series, I never watch the rest. You should try Black Mirror: The Vanishing instead of making a page of Black Mirror. (Ednasharon24534, 12.21am) September 21, 2020.

I should warns you that I didn't really create Black Mirror: The Vanishing, someone did who are now blocked from the wiki (I check on their profile). (Ednasharon24534, 1.09am) September 21, 2020.

Retrieved from "https://fanon.fandom.com/wiki/User_talk:CLTwins15?oldid=540283"
Community content is available under CC-BY-SA unless otherwise noted.