Until Dawn is a 2018 horror film based on the video game, starring

When eight friends are trapped on a remote mountain retreat and things quickly turn sinister, they start to suspect they aren't alone.

On February 2, 2014, ten friends, Sam (Dakota Fanning), Josh (Douglas Booth) and his twin sisters, Hannah and Beth (Hailee Steinfeld), Mike (Tyler Posey), Jessica (Liana Liberato), Emily (Marline Yan), Matt (Justice Smith), Ashley (Chloë Grace Moretz), and Chris (Nat Wolf) are gathered together at the Blackwood Pines lodge on Mount Washington for their annual winter getaway. During their celebrations, a few of them decide to play a prank on Hannah, who is romantically interested in Mike. Humiliated, Hannah runs out of the cabin and into the snowy woods. Beth, her sister, chases after Hannah. Beth locates Hannah crying in the middle of a small clearing and comforts her. Suddenly, they hear a violent noise and run from an unseen pursuer. As they're cornered at the edge of a cliff, Hannah slips and falls, grabbing onto Beth. Hannah and Beth both fall to their apparent deaths, never to be seen again.

On the one year anniversary of the disappearances of Hannah and Beth Washington, the remaining seven friends accept Josh's invitation back to Blackwood Pines and make their way there. As the group separates to partake in their own festivities, their seemingly idyllic getaway begins to quickly turn sinister in more ways than one. Mike and Jessica head to a guest cabin for some alone time, but Jessica is kidnapped by an unknown creature. Mike chases after them in an attempt to save her. He finds her unconscious just before she disappears as the elevator she's laying on falls down the shaft. Mike then follows a stranger (TBA) whom he believes killed Jessica to an abandoned sanatorium, in which he explores and discovers information about a mining accident in 1952, which resulted in miners being trapped following a cave-in; one was captured and tortured by doctors at the sanatorium while a reporter attempted to find out more on the cover-up that followed.

Ashley, Chris and Josh use a Ouija board to communicate with spirits and receive communication from Beth. Josh, convinced that either Ashley or Chris are messing with him, storms off. Chris and Ashley investigate the clue that the spirit communicated, but they are knocked unconscious by a mask-wearing psychopath and Ashley is kidnapped. Chris tracks her down and finds Ashley and Josh on the deadly end of a Jigsaw-like trap and must choose between saving one of them. Regardless of who Chris chooses, the saw turns to and supposedly kills Josh by shredding his body in half. After learning about the psychopath, Matt and Emily locate a radio tower and call the mountain rangers for help, who inform them that assistance won't arrive until dawn, at the earliest. An unknown creature then causes the tower to collapse by cutting one of its cables. In the chaos that follows, Emily and Matt are separated in the mines. Matt is attacked by the unknown creature but escapes using a flare gun Emily gave him while on the tower. Meanwhile, Sam is stalked by the psychopath, chased throughout the lodge, bus escapes.

Ashley and Chris go looking for Sam in the basement and encounter multiple supernatural occurrences along the way. They find a dummy wearing her clothes before the psychopath knocks both of them unconscious. They wake up strapped to chairs as a saw slowly lowers from the ceiling and Chris is forced to either shoot himself with a gun or shoot Ashley, with the other being allowed to live. Mike then returns and regroups with Sam; the two walk in on Chris and Ashley discovering the gun was filled with blanks. The psychopath appears and reveals himself to be Josh, who was playing a prank on them the whole time. He also reveals that all the supernatural occurrences Chris and Ashley encountered were faked by him. However, he denies any involvement in the attack on Jessica. Mike knocks him unconscious, brings him to the shed where Josh initially faked his death, and leaves him tied up. Meanwhile, in the abandoned mines, Emily finds Beth's head and some of their personal effects, learning that Hannah had actually survived the fall off the cliff and had buried Beth. She then encounters the stranger whom had previously stalked Mike and Jessica. He saves her from the unknown creatures, who appear in the mines and begin to attack. Emily flees from the creatures and escapes back to the lodge. During her escape, she has be bitten by one of the creatures. Sam, Mike, Chris, and Ashley then rendezvous with Emily at the lodge.

The stranger who has been stalking the group, previously believed responsible for the deaths of Hannah and Beth, reveals himself at the lodge. He explains that the mountain is infested by Wendigos, former humans who were possessed by evil spirits after consuming human flesh, and that they will not be able to escape to safety until dawn, when the Wendigos cease their hunt. Chris and the stranger decide to head to the shed and rescue Josh, but discover that he has vanished; the stranger is decapitated by the Wendigos soon after. Chris flees back to the lodge and makes it to safety. Sam, Mike, Ashley, and the remaining survivors flee to the lodge basement for safety. The survivors discovered that Emily was bitten, causing Mike to consider shooting her under the belief that the bite could turn her into a Wendigo. After sparing Emily, Mike leaves for the sanatorium in an attempt to find Josh and retrieve the key to the cable car so they can all escape. Afterwards, Ashley reads the stranger's journal and finds out that the Wendigo bite is not infectious, and only the consumption of human flesh can possess someone with the Wendigo spirit.

In the sanatorium, Mike encounters dozens of Wendigos; he is forced to destroy the sanatorium in order to escape. Meanwhile, Sam discovers more information about the Wendigos and follows him along with the remaining survivors. As they traverse the tunnels, Ashley hears Jessica's voice pleading for help, but she regroups with the others. Chris, Ashley, and Emily are forced to return to the lodge by a rock wall that only Sam has the skills to traverse. Sam continues on and encounters Mike, possibly saving him from a Wendigo attack depending on choices he made in the sanatorium. While exploring the mines, they may find Beth's grave and Hannah's diary, revealing that Hannah was forced to resort to eating Beth's body when rescue did not come, and subsequently turned into a Wendigo. They eventually find Josh in the mines suffering from extreme hallucinations. Mike helps Sam reach the surface, but the Wendigo Hannah drags Josh away. Sam, Mike, Chris, Ashley, and Emily flee from the Wendigos to the lodge only to encounter Hannah and several other Wendigos. The Wendigos begin to fight each other and cause damage to the lodge, resulting in gas being released from the fireplace into the room. The group uses the gas leak to destroy the lodge, killing all of the Wendigos inside just as dawn breaks and rescue helicopters arrive. Meanwhile, Matt and Jessica have survived, they regroup and attempt to flee from the Wendigos in the mines.

Over the closing credits, the survivors conduct interviews at a police station where they explain their story. In a post-credits scene, two policemen exploring the mines discover that Josh has eaten the stranger's corpse and turned into a Wendigo; he then attacks them. 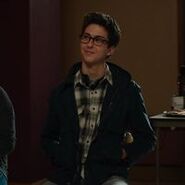 Beth Washington
Add a photo to this gallery
Retrieved from "https://fanon.fandom.com/wiki/Until_Dawn_(Live_Action_Film)?oldid=362958"
Community content is available under CC-BY-SA unless otherwise noted.