Tron: Reborn is a 2013 American science fiction film directed by Joseph Kosinski and produced by Steven Lisberger. It is a sequel to the 1982 film Tron and 2010 film Tron: Legacy with Jeff Bridges reprising his roles as Kevin Flynn and CLU, Garrett Hedlund reprising his roles as Sam Flynn, Olivia Wilde reprising her roles as Quorra and Bruce Boxleitner reprising his roles as Alan Bradley/Tron. The other cast members include Georgie Henley as Alice Flynn/Annie Flynn, Sam's cousin and Kevin's niece, Daveigh Chase as Eve, who save Sam and Alice from get kill by CLU in a Light Cycle match, Tayna Chrisholm as Alia Weston, Sam's friend, Scout Taylor-Compton as Hannah Flynn, Robert Pattinson as Simon Flynn and Patricia Clarkson as Zoe Flynn, Nicholas D'Agosto and Dakota Fanning as Eric and Lizzie, Eric is Annie's lover in the Grid and Lizzie is a girl who helps Sam, Kevin and Alice. 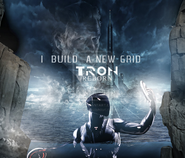 Walt Disney Pictures
Add a photo to this gallery
Retrieved from "https://fanon.fandom.com/wiki/Tron:_Reborn?oldid=95379"
Community content is available under CC-BY-SA unless otherwise noted.