The gameplay of Touhou Azure Trilogy is similar to that of the Marvel vs. Capcom franchise and Bandai Namco's Dragon Ball FighterZ. Using Spell cards act in the same behavior as super attacks. Up to two players can now battle it out by using more than one character. During gameplay from other fighting games in the Touhou series, it has a new feature called "Azure Rage". It is a new power-up where it boosts the player's attack and defense power for a short amount of time. It also enhances all of the special moves and Spell Cards, too. In Story Mode, the player can battle throughout the land of Gensokyo, completing the chapters and defeating the corrupted Angel herself, Faye (who appears from the MMORPG game, League of Angels III) who holds the Scarlet Crystal that turns her into a corrupted version of Bartoli, making it one of the two transformations as the final boss. When defeating Bartoli, Konngara will appear in front of her and try to remove the Scarlet Crystal from her in order to prevent further corruption, but immediately fails as the permanent transformation rages as Bartoli threatens to use the "Scarlet Prison" signature move as a spell card to trap Konngara and absorb her to become even stronger than ever, whom Reimu and Marisa (in their Princess forms) must defeat. In Arcade Mode, the player can battle through eight stages, with Yukkuri Reimu serving as the sub-boss of the ninth stage and corrupted versions of Faye and Bartoli, with Konngara serving as Faye's partner on the tenth and final stage. This mode features the ranking meter. Winning a round raises the grade by 0.2 (0.4 upon delivering the final blow to an opponent using a Spell Card, 0.6 upon finishing a round in 60 seconds or less, 0.8 upon either getting a first attack or a perfect win and 1.0 upon getting a first attack and a perfect win). Only the highest ranking level gets shown. Players can still continue upon losing, but the ranking lowers by 0.5, any consecutive continues upon losing lowers the ranking by 1.0. This ranking meter varies the grade level as it follows upon the completion of Arcade mode: E (0.2-1.0) → D (1.1-2.0) → C (2.1-3.0) → B (3.1-4.0) → A (4.1-5.0) → One Star (5.1-6.0) → Two Stars (6.1-7.0) → Three Stars (7.1-8.0) → Rainbow Star (8.1-9.0). In Versus Mode, players can battle it out in 1-3 on 1-3 battles. The player can even battle the computer player and watch two computer players go head-to-head. In Ghost Battle, the player can defeat many Ghost characters to unlock various items or Gensokyo coins to spend at the shop. In Training mode, the player can freely practice combos against an AI-Controlled Computer player, and also complete training missions in that mode. In Online Mode, an internet connection and a Nintendo Online Membership card are both required for players to play online.

All of the characters return from each fighting game in the Touhou series, with Faye and her form Bartoli (who appear from League of Angels III) serving as the first two exclusive characters to appear in this fighting game. Fighting newcomers who are new to this fighting game do not. New DLC characters will be coming this winter and the years of 2020 and 2021. On March 12, 2020, the second DLC Character Pack was announced and has been released on March 27, 2020. On October 29, 2020, the third DLC character pack was announced and will be released on November 13, 2020 along with the next DLC character pack. Leaving the details for the DLC character packs 4, 5 and 6 to be confirmed. DLC exclusive characters, Suigintou (from Rozen Maiden), Glitter Lucky (from the Pretty Cure series), Ladybug (from the Miraculous Ladybug series), Peach (from the Super Mario series), Zelda (from the Legend of Zelda series) and the Inkling Girl (from the Splatoon series) have all been confirmed as of August 2, 2019 and the first three are the first to be released on December 8, 2019. Peach, Zelda and the Inkling Girl for the Nintendo Switch version have been confirmed and released on December 11, 2019 along with Suigintou, Glitter Lucky and Ladybug. The seventh DLC exclusive character, Illyasviel von Einzbern (from the Fate franchise) was announced on August 14, 2020. Her reveal trailer was narrated by the Fate character herself, Rin Tohsaka. Illyasviel will soon appear on October 2, 2020 along with the Sacred Legacy DLC costume pack. Characters highlighted in bold are hidden characters, while italics describe DLC characters.

Only guest characters (who appear as DLC characters) appear as newcomers, with the first exclusive character, Faye appearing as the non-playable final boss of both Arcade and Story modes, but comes back playable when players purchase the Season 2 DLC Pack as of March 27, 2020. The first three exclusive DLC characers, Suigintou, Glitter Lucky and Ladybug have all been confirmed as of December 8, 2019. Peach, Zelda and the Inkling Girl appear on the Nintendo Switch version as of December 11, 2019. The seventh exclusive DLC character, Illyasviel von Einzbern from the Fate franchise was announced on August 14, 2020 and will be shown on October 2, 2020 along with the Sacred Legacy DLC costume pack.

Some of the characters have their own assist character.

The four hidden stages can be unlocked by completing chapters throughout Story Mode. So far, there are 27 normal stages, 4 hidden stages and 10 DLC stages, making it a total of 41 to choose from. Some stages will have a day-night cycle that runs according to the console's internal clock.

Alternately, the player can select the time background shown below by pressing and holding the correct button:

NOTE: This cheat code does NOT work when playing on the rooftop stage of Scarlet Devil Mansion.

The character select screen, with all hidden and DLC characters unlocked (Nintendo Switch version, Season 2 update)
Add a photo to this gallery 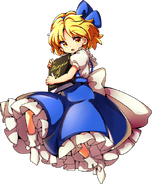 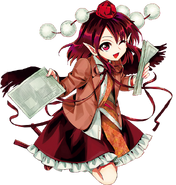 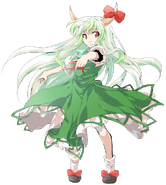 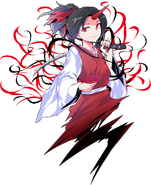 Konngara (final boss alongside Faye)
Add a photo to this gallery

Retrieved from "https://fanon.fandom.com/wiki/Touhou_Azure_Trilogy?oldid=545800"
Community content is available under CC-BY-SA unless otherwise noted.