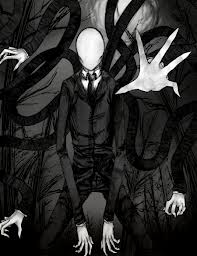 After Amanda Morrison's boyfriend dies in a car crash and her father gets fired from work they move to the small town of slenderman where they are murders and children disppering. When Slenderman posses Adam Morrison the Morrsions are caught in a horryfing game.

The opening scene shows a girl and a boy walking threw the slender woods(town nickname). The boyfinds a book in a mass of vines and takes it with him despite the girls protestes. The book flings out of the boy's hands and lands on the ground and the page is of  atall man in a suit and a faceless face. They both look up at the same time and Slenderman is standing up on the top of the hill watching them. Before the boy can run Slenderman appers in front of hand his hands and tentclaes sucking him to death and the secne neds with the girl screaming as she falls on the ground.

After Amanda Morrison's boyfriend dies in a hit and run she becomes depressed. Her Dad Tim Morrison is a famous aurthor and takes his wife Caroline and there three children Amanda, Thomas and Adam to the town of Slenderman where murders of young children and kiddnaping so the town named it Slenderman form the legend. Tim dose not tell his family that there has been severl murders of familes in tehre house and he plans to wirte a book about it. Amanda and Adam are excited about the town of Slenderman but Thomas is not and part of the reson they left is because Thomas is a trouble boy and Tim got a job as a detective.

At school Amanda mets a group of friends named Chole, Austin, Luke, Caleb, Ashley, Kat and attractive Cameron. They tell her about the murders at her house and she keeps it to herself and not tells her Mom beacuse she would move them away and Amanda likes the place they also tell her that there going to camp in the slenderman woods in a few days and tehy invite her and Amanda accepts. That night while getteing an argument with his parents Thomas finds the book that the kids found in the beging of the movie.

At work Richard Tim's partner kisses Tim but Tim punches hm and runs out of his office while Slenderman watches. After Tim is done he leaves and Richard go's home where the TV comes on static. Richard turns the TV off but it comes back on and Slenderman is standing tehre in the trees in the TV screen. Richard unhoooks the cord but the TV is still on. The TV shows the Morrison's mansion on TV and then Slenderman throws the TV at Richards face killing him. Patrick Tim's boss go's into the Slenderman woods seraching for Slenderman to see if he's real.

Patrick heres noises. He see's Slenderman standing in the trees anmd he flys up onm the air and lands on Patrick and his hands go into his mouth chokeing him. Amanda, Chole, Austin, Luke, Caleb, Ashley, Kat and Cameron pack up there camping gear and go into the woods.

Thomas gives Adam the book and he stays up all night and reads the pages. A voice calls him from outside and he follow sit into the woods where Slenderman chases him into he gets stuck into a mass of thorns where they grab him and choke him in till Slenderman appers in front of him. The tentcles off his back crawl into Adam's mouth posseing him. Adam walks back to the house and go's to sleep clutching the book.

Tim finds Adam in the kitchen cuttting his face off with a knife. Tim tries to stop him but Adam stabs him in the shoulder with a knife and during the fight Tim throws Adam in the celler locking him inside. When the group of friends reach the clearing that Slenderman always takes his vitcims at they set up camp for the night and Ashley go's off into the night beacuse she lost her grandmothers locket. Slenderman finds her and rips her throat out.

Cameron tells them the story of The White Man which is the story of slenderman who torments his vitcitms by killing them or posseing them and that results in kidnapping. Luke go's off into the woods in search for Ashley and fnds a page tapped to the tree saying No No No No! He finds Ashley dead by a tree and Slenderman uses his teleknis powers and throws a branch through his body killing him. Kat and Caleb here's screaming in the woods and they go in and Kat runs into Slenderman whose hands cover the camera up and her screaming.

Caleb finds Kat dead on the ground and Slenderman looking down at her and he sticks his hand through Caleb's heart killing him. Austin and Chole go into the tent to have s while Cameron and Amanda cuddle and kiss for the frirst time. Luke go's off into the woods with his camera and as he go's the camera turns static and you can see Slenderman in several places and he is finslly drug off into the dark with him screaming.

Austin leave sthe tent to pee and get's head turnded all the way around. Chole, Cameron and Amanda find Austn's dead body and run through the woods to her house. They find Tim, Caroline and Thomas in the living room and Amanda asks what happend and they revel that a posseoed Tim is in the celler and Slenderman go's back insdie him and you can here Tim screaming No No No No!.

Chole is lured outside by Austn calling her name and she finds him swinging on the tireswing and it reveles to be slenderman and he stabs her with a large branch.

Retrieved from "https://fanon.fandom.com/wiki/The_town_of_Slenderman?oldid=117602"
Community content is available under CC-BY-SA unless otherwise noted.