But what should have been a simple plan ends up going horribly wrong. With Crona, whom later revealed to be Tlob's first childhood friend as been permanently granted the power of sorcery by accident in ensuing fight against the mysterious Morganian Knight. With Crona now became Morganians' target for their mysterious agenda, Balthazar have no choice but to appointed her as his new apprentice so she could control her newfound powers. At the same time, another enemy approaching Trostville....

Part 3: He Who Hunt Monster

It was something that Tlob learned back in her home village where her fight against the monster who tormented her resulting the said village reduced into ruins. Some people who knew about her past believed that due to her pain, it's just the matter of time before she would become as worse as her said tormentor. Though it fortunately never happened, she now having herself facing a dillema: When the very monster that made her suffer returned to her life once again and this time would do anything to destroy her kind, she must stop him with one way, or another.....111

This sections consists of list of characters in the fanfic story, with names of actors that likely suit as their voice actors and actresses. As these are pure fanon, it means these are simply the author's what if? fantasy. 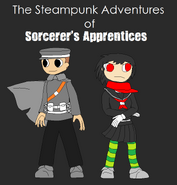 Promotial poster
Add a photo to this gallery
Retrieved from "https://fanon.fandom.com/wiki/The_Steampunk_Adventures_of_Sorcerer%27s_Apprentices?oldid=286991"
Community content is available under CC-BY-SA unless otherwise noted.