Fanon Wiki
Register
Don't have an account?
Sign In
Advertisement
in: Movies based on Stephen King novels

The Rage: Carrie 2 is a 2020 American supernatural horror film and a sequel to Carrie.

After the suicide of her only friend, Rachel has never felt more on the outside. The one person who reached out to her, Jesse, also happens to be part of the popular crowd that lives to torment outsiders like her. But Rachel has something else that separates her from the rest, a secret amazing ability to move things with her mind. Sue Snell, the only survivor of The Black Prom 22 years ago, may hold the key to helping Rachel come to terms with her awesome, but unwanted power. But as Rachel slowly learns to trust, a terrible trap is being laid for her. And making her angry could prove to be fatal.

Will Smith as Jay

Lisa Parker - After her boyfriend Eric Stark, dumps her, she becomes extremely depressed. So she goes to the top of the school and just as Rachel notices, she jumps of the building and lands on Sue Snell's car, smashing her skull and killing her instantly.

Chuck Potter - At the Party, everyone laughs when the sex tape is shown on the projecion screens. This causes Rachel to fall and have a vision of everyone laughing at her. Just then, the doors slam shut and Chuck picks Rachel up to reveal her thorn heart tattoo is spreading all over her body, everyone begins to get scared. Than Rachel shatters the glass doors and makes the glass go flying towards the Party guests, killing and decapitating Chuck and another guy.

Brad Winters - Barbara and Sue arrive at the house to try and save Rachel. Sue gets to the door and tries to knock to see if it will open. Brad goes to open it but Rachel spots him and she throws a fire poker from the fire place and she throws it at him. The poker impales him in the head, his dead body dangles from the door while Sue and Barbara watch in horror.

Sue Snell - When she sees the fire poker stuck in the door, she begins to back away from the door. But before Barbara can stop her, Sue trips down the stairs and breaks her neck.

Amy Meschan - Amy joins the group of students who are running around screaming and trying to get out. Rachel spots Amy and uses her telekinetic powers to make CDs from a CD player fire at rapid speed at Amy. The CDs slice into Amy's chest, stomach and back. She then falls over, impaled with CDs and blood all over her body.

Monica Jones - Monica, Eric, Mark and Tracy are some of the few who make it out of the party and go to the pool armed with harpoon guns. Rachel arrives at the pool and corners them. Just as Monica's fingers are on the trigger, Rachel sends shards of broken glass in Monica's back and the back of her head. She screams and spews out blood, then falls dead after accidentally shooting Eric with her harpoon gun.

Eric Stark - Monica, Eric, Mark and Tracy all aim for Rachel with their weapons as she approaches the pool. Monica is about to pull the trigger when Rachel sends shards of glass flying into Monica from the back. She then spews out blood and stumbles when she accidentally shoots Eric in the face with her harpoon gun, which sends the harpoon and Eric's body flying and pinning itself to the wall behind.

Tracy Campbell - After she witnesses Monica and Eric's deaths, she drops her weapon and screams in horror. Rachel then makes a burning piece of wood fly towards Tracy which sends her body alight. Rachel then sends Tracy flying and she lands on a flag pole, which impales her body and leaves her corpse hanging their.

Mark Bing - After Monica, Eric and Tracy are killed, Rachel walks towards Mark as he backs away. But just as she is about to killed Mark, she hears her mother crying in the mansion. This distracts her, and Mark shoots her in the arm, and she falls into the pool. A she sinks, the glass pool cover activates, but before it covers the pool, she uses her powers to make Mark fall into the pool. She then manages to get out just in time, and despite Mark's struggles, he failed to get out of the pool and drowns.

Rachel Lang - After Rachel kills everyone at the party, Jesse tries to convince Rachel that he had nothing to do with it. Rachel does not believe him until she sees the video which is still playing and hears Jesse saying "I Love You" on the video. She finally forgives him, and just before she is going to hug him, the ceiling starts to fall apart. A chunk of the ceiling falls on Rachel's legs and right arm. Jesse tries to help her, but she uses her powers to get Jesse out of the mansion, as she gets burned and crushed to death. 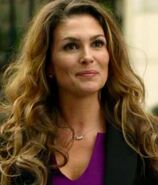