The Los Angeles Team is a 2018 Animated Superhero film directed by J.G. Quintel.

Picking up 6 years after the death of her mom, 12 year old Kitty Warbler (Noah Cyrus) lives a lonely life, until one day she meets the Phoenix (Dave Franco) who goes by the the name Alan in the modern world.

Kitty soon learns that she has the same powers as Alan does, and the two realize they must use their powers to stop an evil force that threatens their homes in Los Angeles.

They soon enough end up joining a legendary superhero team known as the Los Angeles Team!

J.K Simmons as Jackson, the leader of the los angeles team 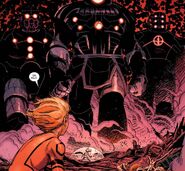 One of the few superhero films that wasn't based on a comic.

Retrieved from "https://fanon.fandom.com/wiki/The_Los_Angeles_Team?oldid=438840"
Community content is available under CC-BY-SA unless otherwise noted.