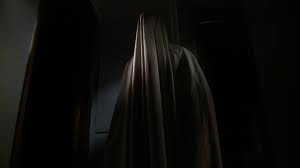 A normol fourteen year old, a workholic Mom and Dad find themselves caught in a paranormol disatior when the son flims stuff around the house catching scary stuff like stuff that happens when they sleep and a ghost floating around in a sheet

The houses aren't haunted you're family is

Crisspin turns on his camera on the way home from work and flims his Mom in the car doing crazy stuff. Crisspin shows the house and his French Masten Freedom. Crisspin and Erica talk about Feilx always being gone. On that first night Crisspin leaves his computer in the kitchen to see if any weird stuff will happen. A ghost in a sheeet stands in front of teh camera and growls in till Freedom sees it and the ghost dissappers. Crisspin and Erica wake up and find the sheet on the ground. The next day Crisspin and Erica plan to go to Waterfront park. That night Crisspin leaves his camera on the ground in front of the bathrooom and sets another camera in the gym room.

The bathroom door opens and a ghost in the same sheet walks up to the camera and goes into the gym room. The ghost stits in the chair and when the lights go back out the ghost is gone. That night Crisspin leaves his computer in the kitchen and the chairs start to move on there own. Crisspin comes back into the living room and leaves when the ghost in the sheet appers in the kitchen starring at the camera. The next morning Crisspin and Freedom are on the front porch.

A demonic voice calls his name and Crisspin starts to leave when he is banged against the railings and dragged off the porch. Crisspin goe soutside to tell Erin and leaves Freedrom on the porh. An unknown force throws a broken piece of the porch at the computer startling Freeddom. Crisspin runs outside and finds the piece and gets his computer and he and Freedom gos inside where Crisspin cries. That night Feilx is home and he makes Crisspin go get the mail and Crisspin brings his computer.

Crisspin gets the mail and heres the same demonic voice call his name and Crisspin heres growls and runs back to his house. Crisspin has to go to work with his mom and he goes outside with her when she smokes. Crisspin leaves the computer outside and goes inside with Erin. An unknown person picks the camera up and walks inside the house and hides it by the couch. Crisspin goes in the living room to get his coat and finds the computer. Feilx notces that Freedom has been eating alot of sticks lately.

Crisspin goes to the back of the house leaving his camera in the living room and he starts coughing. Erin thinks he's just having a coughing attack and goes into the back of the house. The coughing eventully stops and Crisspin runs outside with Freedom. He sits his camera in the middle of the yard and walks away off the property. Sticks fall from the branches above and land on his computer and a stick is thrown at it. When Crisspin comes back Freedom starts to eat the sticks and he here's noises coming from his computer and backs up againt the tree.

The noise stops. Crisspin and Erin walk into the kitchen and everything is gone then they fall down. Crisspin, Erin, Feilx and Freedom move into Erin's friend ouse Earl. Everything goes good there and Crisspin's brother comes over and they all act like the ghost which causes the TV in the room to shatter. Adian and Crisspin go into the living room and play and the ghost walks in unotcied by Crisspin and Adian. Erin buys a house and they ove into it and Earl says that's a bad place to move into.

Crisspin asks why and Earl dosen't respond. That night Crisspin here's starnge noises outside the window in the living room. There's a hole in the curtian you can look through. Crisspin looks through it and someone bangs on the window and he backs up he looks through it again and the same bang happens. The next night Feilx comes home for good and the ghost stands in the living room and kitchen. Erin and Feilx go into the kitchen where the ghost walks out of the bathroom and walks past them.

The ghost walks into the living room and suddenly the blanket flys to the middle of the floor. That night the lights start flickerong and Crisspin is aparently sleepwalking and he screams at the camera. As Crisspin looks at the footage strange noises are heard and the two leietter bottle starts rolling around. Crisspin goes back into the kitchen later and sits a pillow in one of the chairs. He here's Erin scream and runs into the living room with his lap top and find that she's freaking out over a cockroach.

Crisspin runs back into the kitchen where he sees the ghost sitting down in a chair. He drops the camera but picks it back up and walks up to the ghost and his head moves and Crisspin runs into the living room not saying anything. Crisspin goes back into the kitchen where the blanket is lying on the floor. Some time later Crisspin heres the door to the storage room slam shut. He goes in there and he turns the lights on and sees the ghost in the blanket. The door slams shut locking him in and he gets attacked.

He wakes up possessed and walks into the kitchen. Through out the night Crisspin wakes up possossed then goes back to normal several times. After Twila and Gene drop Crisspin off Erin vacolms the living room and Crisspin goes into the storage room where he pulled imn and once again possossessd again. Crisspin acccdenlty plays a video of him with the blanket over him. That night while Erin is talking to Feilx the ghost stands there and watches them.

Crisspin, Erin and Feilx go to a camping trip with Adian, Faith, Twila and Gene at Jellstone Park on October 12th 2013. Crisspin leaves the tent and yells "What The!". Erin and Feilx get into an argument and Erin grabs Crisppin's camera and goes in her car where she starts screaming. Feilx has a camera out and is looking for Erin and finds her standing in the cemetary with her hood up she turns around and Feilx starts screaming and the camera is knocked to the ground. Crisspin walks to the cemetary arch and waves at the camera and walks awa just as the camera turns off.

Retrieved from "https://fanon.fandom.com/wiki/The_Freedoms?oldid=189910"
Community content is available under CC-BY-SA unless otherwise noted.