A family moved into a new house with some weird results. There are 2 psychics who said that the house was haunted by the ghosts who died here. As soon they enter, their children began to see ghosts and Jacqueline Willows, the white lady begins haunting them. 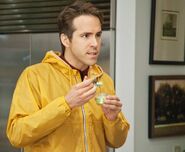 Nora
Add a photo to this gallery

At the hospital, Christine told Ellie about Lorraine and John's death

A sequel, titled The Dark House: White Nightmare, is scheduled to be released in October 19, 2018. Only Sandra Bullock as Christina and Julianne Moore as Nora returned.

A follow up, called The Dark House: The Haunting, is scheduled to be released in June 19, 2016. It does not follow the haunting of Christina Harding, it follows a married couple (Justin Long and Amanda Seyfried) trying to save the town before its too late. Julianne Moore reprises her role as Nora and Matthew Broderick with Francesca Capaldi make cameos as Hannah and Thomas Sterling.

Add a photo to this gallery
Retrieved from "https://fanon.fandom.com/wiki/The_Dark_House?oldid=253627"
Community content is available under CC-BY-SA unless otherwise noted.