The Darcy is a 2018 upcoming supernatural action/adventure superhero drama miniseries directed and written by Karen Gillan. The story revolves around a predatory woman who has the ability to manipulate time to conquer the world, allowing it to exploit the phobias of her victims. She is a former police officer named Penny Williams played by Courteney Cox. The protagonists are The Darcy Kids, a group of outcast kids who discover Penny's supernatural powers and must find the way to destroy her and save the world. The series takes place over two planets, the first when the Darcy Kids first discover their powers on a deserted planet, and the second when they're engaged into the final showdown against Penny on Earth.

Two boys named Leon and Cal participate in a charity skydive for a special space adventure to Planet Magma. However, the fun end when Cal gets a call from his uncle where his parents are visiting him, and receives news that they've died in a car accident.

The Fight for the Earth 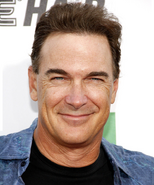 Lord Destructor
Add a photo to this gallery
Retrieved from "https://fanon.fandom.com/wiki/The_Darcy_(miniseries)?oldid=375100"
Community content is available under CC-BY-SA unless otherwise noted.