Carl (also known as The CEO) is the main antagonist of the 2018 animated film, Dogfield 2.

The CEO (who's given name is Carl) has been given so much in his life he became a billionaire. He loves his pet goldfish more than anything in the world, except maybe his nephews Darren and Erick, and himself.

His nephew is Darren, which makes sense because of how spoiled Darren is.

While he acts like a polite and charming gentleman when people first see him, the CEO is actually a ruthless, evil, failure-intolerant, arrogant and corrupt businessman. This is represented where his animated counterpart who will stop nothing to put the Canine Cookies' factory out of business and get revenge on Ben in order to rule the entire world, but his ego leads to his downfall.

The CEO first appears in the beginning, where he makes a funny talent show and invites Erick and Barbie, but unaware that Erick is still in prison. The CEO steels is device wondering what does it do, then he uses electricity against him, and Barbie and Ben escape.

That night, the CEO planned to get the secrets from Ben to get a memory-erasing device that would wipe everyone on the planet. But Elizabeth kept on figuring out the CEO's scheme and he wiped all of their memories 93 times. The Cable Guy managed to foil his plan by stealing the mind eraser, but after they mind-wiped his pet goldfish, Goldie, he vowed revenge against them.

As Erick talks to the CEO on his phone, he says his excuse and the CEO disapproves him of the plan to get rid of the coat factory.

When playing with his pet goldfish, Goldie, the CEO confronts Ben and the other dogs, revealing he had the mind eraser all along and erasing Barbie's memories, After Ben telling the information about a mind erasing device, the CEO reveals his true plan to put the cookies factory out of business, so he could memory erase the gang and take over the world, and congrulates Erick to have him reverted back to his plan to kill the dogs, but became furious that the dogs take on human characteristics. Ben tugs the mind eraser out of the CEO's hands which ends up in the fish tank and memory-erasing Goldie.

It is presumed that the CEO is arrested for conspiracy to commit fraud, animal abuse, embezzlement, crimes against humanity and verbal assault. 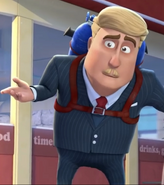 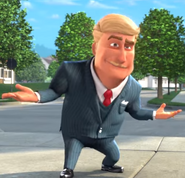