Warner Bros., DC studios
The Batman is a 2021 American superhero film based on the DC Comics character Batman created by Bob Kane and Bill finger.

When the Superman reboot was announced in late 2020, Warner Bros. and DC confirmed that they would be creating a cinematic universe based on their characters in hopes of creating a Justice League movie. The universe would begin with the Superman film, and the second film announced to be a part of the universe was a Batman reboot.

Several scripts were worked on but none really worked until the draft by paul dini, the creator of harley quinn and head writer of batman the animated series, and James Vanderbilt, based on his work on Zodiac and The Amazing Spider-Man, were chosen. They talked with Miller and they all agreed that the film would take element from various batman works particularly the early golden age material, Frank Miller's the dark knight returns, Batman year one, the long halloween, Death in the family and most importantly Batman: the killing joke. Dini said that the killing joke was definitely a setter for the kind of batman we were trying to create. Miller stated in interviews that the tone and atmosphere was heavily inspired by the animated series. The Villain Doctor Death was actually taken from batman's early appearances and in the 30s Comics he's essentially the DC universe's first supervillain, so it was decided to do something similar.

when casting the film various actors were chosen for the role of batman like Tom hardy, James McAvoy, and Michael Fassbender, however eventually Karl Urban was chosen. Urban had some experience with comic book films Most famously playing the titular character of judge dredd in Dredd . "it's a high honor to play a charcter like Batman, And I have three comic book characters i've played now. Ready for my forth" Karl said in an interview. the next roles were harder though Alfred pennyworth was Just as hard but eventually Timothy Dalton was chose, Dalton also had some experience with superheroes playing the villain neville sinclaire in the rocketeer. For the Role of Catwoman People like Rachel weisz, and Charlize theron were considered before Morena Baccarin was chosen. Morena was stated saying "i was given comics that retold her origins and i took her past into account, as well as the preformances from the 60s televison show and michelle pfieffer's preformance, yet i still wanted to do my own thing." she went on to be in many's eyes the definitive Catwoman.

For the roles of Nightwing, Daniel Radcliffe was cast. Daniel said "i always thought of him as sort of like a brother Batman never had/The angel on his shoulder. plus i'll know that there's a chance i'll be him." for Barbara Gordon Emma Watson and Amanda seyfried. the role went to Emma Stone who said "i wanted to show barbara as a fighter, as just as strong as even batman. But i knew i should show her vulnerability which is why she's has night terrors about the joker."

As soon as the reboot was announced, Bryan Cranston was a fan favourite for the role of James Gordon. Cranston had previously voiced the character in the animated Batman: Year One film and was reportedly interesting in reprising the role. The fanbase's reaction to his casting was overwhelmingly positive, with Cranston commenting on Twitter that he was honoured to get such a reaction. Julianne moore lobbied for the role and was happy to discover that she was the first choice. Rene montoya and James maddsen were also first choice picks with the two actually appearing at comic con as montoya and Bullock respectively.

For the villains Robert Carlyle was as the riddler chosen after Guy pearce refused. Mark addy was cast and actually took inspiration from the comics and the animated series and played off of that. "he's the Sociliate of the underworld" Addy describred his character. For the main villain of Doctor Death,

The film was Well received with fans saying it did the characters justice. Critics enjoyed the neo-noir atmosphere and story telling. Some even say it's better than the dark knight. Doug walker said "it's like the Purest form of batman but it also took a huge risk and knocked it out of the park." James rolfe said "it's like an old movie but done in a new style."

The film was followed by World's finest in which superman and batman met. Then Justice League which batman, nightwing, Batgirl, Red robin, Spoiler, Batwoman and Robin appear, though only Batman joins the league. Then with The Shadow. in which batman admits he was inspired by the titualr hero. Return of the Batman where he fights Black mask and other mobsters. House of the batman Where the Batfamily are trapped inside arkham asylum and have to deal with every batman villain, including the joker. Trinity where Batman Superman and wonder woman fight off an alien invasion on their own, and Trinity/The shadow where The trinity team up with the shadow. The Titans informing robin and nightwing about the movie's conflict, Deathstroke. Justice league Brave and the Bold, where The justice league faces off against their Earth 3 counter parts. City of the batman where Gotham is cut off from the rest of america. legacy of the Batman where Dick has to take on the mantle of batman.  Batman against superman in-which friends become enemies. and finally Justice league apocalypse. 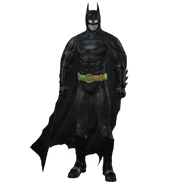 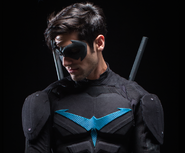