The Amazing World of Gumball: Movie 3

Gumball (now 16 years old) and Darwin (now 14 years old) now attend Elmore College, and are just about ready to enjoy the rest of their lives preparing for their futures; and Rachel Wilson returns at one point. However, all of that changes when Anais (now 8 years old) had a vision saying that she saw her parents will move away out of Elmore for their new job of the referee games in the World Cup in Brazil. 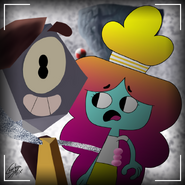 See the Transcript Of The Amazing World Of Gumball Movie here

Much like many previous episodes the film is a musical.