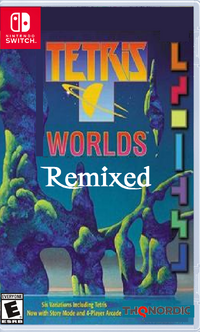 Tetris Worlds Remixed is a Remake version of the video game Tetris Worlds. Originally released in 2021 for Microsoft Windows, Xbox One and Xbox System X, it was later released for Nintendo Switch, Stadia, and PlayStation 4 in 2022. In 2023, an Lite version and a single-cartridge compilation version (which included this game and Style Savvy: Fashion Famous) were released for the Nintendo Switch. The latter was bundled with Nintendo Switch systems.

The platform-specific versions of Tetris Worlds Remixed were developed by three different companies. Blue Planet Software developed the PC and PlayStation 4 versions, RCA Interactive developed the Swtich and Xbox One versions, and Krome Studios developed the Xbox System X and Stadia version. All versions were published by THQ Nordic under license from The Tetris Company. All versions all feature a female whispering voice as the announcer and the game has been translated and recorded into several languages: French, German, Italian and Spanish.