Teen Titans (2019) is an 2019 Live-action adventure, drama, comedic and suspenseful comic book film and is the first live-action iteration of the beloved superhero team based on both the comics and original T.V anime series to be included in the DC Extended Universe as well as the second of the two sequels to Justice League: Part II. With the steady slow decline of "Teen Titans Go!" on Cartoon Network compared to the DCEU's lasting effect on the box office, the Teen Titans had yet to be brought to the silver screen, let alone a live action adaption. Luckily, with the release of both Justice League films, the possibility of a eventual Teen Titans film became more and more likely until the post-credit scene for Justice League 2 was leaked, causing Zack Snyder to confirm the speculations. With that being said, the film had begun principal photography around the time “Justice League: Part II” had hit theaters......

The film is written and directed by Jon Favreau, produced by Zack Snyder and distributed by both Warner Bros., and D.C Entertainment.

.....somewhat similar to what ours is like but in a different scenery.....

.....there lies this world called Azerath, one of the few planets that lie amongst the closest dimension. Over 900 years ago, the followers of the first Azar were led to a place between all dimensions where they founded the Temple Azarath. It was Azar's plan to expel all evil from the Azarathians so that the demons couldn't use the dark energy to be fully re-established, and then Azar could finally kill it once and for all.

Those plans hit a snag once a beautiful Empress came along seeking help by the people of Azerath and she was known by her people as Arella (Natalie Portman), formally known as Angela Roth.

But after an extended time of darkness, Arella gave birth to and became the pacifist mother a beautiful baby daughter daughter and in time, she called her.......Raven.....

.....only her former name would be Rachel Roth.

Despite of the unknown origin to the Empress's child, their lives together were peaceful even with their people.....at least, the people....

For someone who was one of theirs, she didn’t seem to be one for getting a lot of craved attention.

There was however a reasons for this......one of which only Arella could possibly understand.

Despite Arella's efforts, her daughter was bound to a great evil foretold by a prophecy which would entitle the subjugation and destruction of all life. Arella forever gave Raven her love, even knowing what she was destined to become: a vessel for the cause of all destruction. The end result was set to be inevitable, for even she could not escape the cruel fate that had been destined upon her since the end of her childhood.

One day on Azerath, that was the day that all he’ll would break loose.

A solar eclipse had blocked out their sun as the radiant beams of heat that came through to their planet sent everyone into a panic.

Arella unfortunately was the last one to look out from her balcony and see the horror that was soon to be unleashed before them. Just like everyone else, she was horrified and petrified for what this meant, not because it was a regular eclipse or anything like that.......

.....it was because she knew the REAL threat on hand here. She knew what and who was coming.

With time running against them, Arella rushed back behind her before zipping through endless hallways. Eventually, she came at a complete stop, gracing upon the presence of Athena through a statue.

Regardless of what her belief in the Greek gods were, if there was any time to call them out for aid or assistance, now might’ve been a few seconds too late.

But that didn’t stop her.

Arella: Athena.....goddess of wisdom......Have our warriors prep for any attack.

Knowing how close their eventual fate had become, they had to make last minute preparations just to be sure their last stand would be their noblest one of all time.

Arella: Azar. Seal off any entrance to the palace.

Azar: She's been more questionable during her lessons. She---she went to the temple of Zinthos to meditate—

Cutting to the temple of Zinthos young Raven age 12 was in meditation chanting.....

She coughed and looked up seeing a wall light a fire tracing a simple....and Raven grabbed her throat as she saw a pear of four...

Yes....the moment has come. You are the key to the earth. You will open the portal. And bring about the end of the world. If your mother hadn't in hadn't interfered 10 years ago....you would have been mine long ago....and now....you will be...as will the earth. And the WHOLE universe!

Arella: *Rushes* GET AWAY FROM HER YOU BEAST!!

Arella carrying her Raven saw the horror that was happening

Arella: The we all fear that might come. And it's here. Azerath will soon be soon be destroyed and....your father....will get what he came for unless....

Arella: My people. As many of you can see....Azerath is dying....the demon lord Trigon will soon crumble us all in his grip. And the same will happen to every planet in the universe. Starting....with the one called earth. And so....to insure hope and survival of our race.....my daughter will carry that hope with her on her journey to earth itself

Man: My lady that's suicide. The portal rests deep within the bowls of that world.

Arella: My daughter will keep the portal closed at any means nessercary. Without her....Trigon has no chance of entering earth's galaxy.

Woman: It's possible the demon could reach her in dreams and images. You said it yourself milday.

Arella: Not if she meditates. *To Raven* My sweet Raven our hopes and dreams will rest within you.

Raven: Then come with me.

Arella: I wish I can. But this is only resorted for you

Raven cried and hugged her mother.

Arella: Ik. I shall miss you too my Raven.

Whatever they were doing they had better do it fast cause as we speak....

.....the doors were being burned down

Arella: Goodbye my Raven. Our hope in you.

The blast force from the eclipse launched a shock wave with fiery force and.... 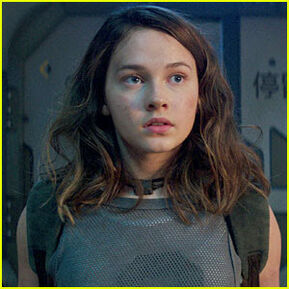 Slade Wilson (Deathstroke)
Add a photo to this gallery

Retrieved from "https://fanon.fandom.com/wiki/Teen_Titans_(2020)?oldid=416362"
Community content is available under CC-BY-SA unless otherwise noted.