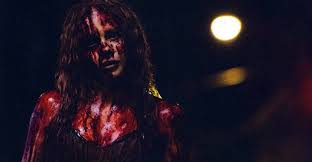 TK is a film based on Carrie.

After being picked on in gym Jamie Eaton goes into the shower room to wash the blood off his knee. The P.E. teacher gets a phone call from his girlfriend is distarcted and lets the boys do whatever they want. Dakota the bully who was picking on Jamie goes into the gym along with his two buddies Nolan and Austin and threatn Jamie. Jamie walks home from school and a neighboorhood bully Carl starts calling Jamie names and Jamie turns around and suddnely he is pulled into the air and is thrown to the ground unconsous.

Jamie runs away after his father comes out of the house not seeing Jamie. Jamie runs back to his house and tells his grandparents what happened. Flora and Nate say it's happning again. They want to lock Jamie in his room and Jamie says no and he says you better stop. They don't stop and Jamie rusn into his room with the door slamming shut by itself. Jamie gets out his yearbook and crosses out Dakota, Austin and Nolan's face out planning to get revenge.

The next day Jamie dosen't come to school. Stephen and Sage boyfriend and girlfriend here about what happend to Jamie. Stephen who is friends with Dakota, Austin and Nolan confronts him about it. They just laugh and Stephen tells the principle Mark Willamson that Dakota Jennings, Austin Stanford and Nolan Wills have been picking and threatning Jamie Flower. Mark tells the three gym teachers Mr. Wood, Mr. Eagle and Mr. Troutman and they all come up with punishing the three boys. Sage comes and vist Stephen after football practice.

Sage is glad that Jamie did that. Dakota. Nolan and Austin cornner Stephen in the locker room demanding to know if he was the one who told on him. Stephen says no afraid. Dakota says "They'll get that fucker Jamie." and walk away. Stephen dosen't tell Sage what happend. Jamie is outside his house thinking about all the bad memories that his grandparents put him through and it makes him angry that the windows shatter behind him. Flora and Nate go into the basement and talk about Jamie. Jamie's Mom died of Telkenis and killed Jamie's father with that power.

Jamie goes to the libary and finds the Telekinis books and reads them. Stephen is at the libary and sees Jamie and he tells him that he's sorry about what happend. Jamie accepts his apology and he reads the books. The next day Mr. Hayes passes out the ballet cards for homecoming. Dakota convinces the whole class to vote for Sage Love and Jamie Flower. Dakota, Austin and Nolan convince the unpopular poeple to vote for Jamie and Sage in return to make them popular after homecoming.

The next day Jamie comes back to school and sits at the back of the room in English IV. Katie Larry announces the nonmies and Jamie and Sage, Sage and Stephen and Dakota and Erica. Jamie is suprised that he's a nonmie but feels there's something going on. Austin, Nolan and Dakota confront Jamie by the bathroom and demand him to go to Homecoming and they make fun of him. Jamie runs away and Nolan goes to convince Arnold Frank to have him in charge of the ballets. Arnold is reluctunt at first but lets Nolan eventully.

On Homecoming night Nate and Flora dosen't want Jamie to go and Jamie locks them in the kitchen and walks to the school which is not far away. At the football game Sage and Jamie's love Stephen talk to him while people look at Jamie at disgust. Meanwhile Dakota sets up a projection screen behind the stage on the feild. After the game is over they announce all the nomnies on the feild. Jamie and Sage when which people is shocked.

Dakota puts on a tape of Jamie doing stuff and Dakota, Austin and Nolan wear masks like Jamie's and pretend to be gay with eachother. Everybody laughs and Sage and can feel evil in Jamie and runs off the stage and out of the feild with Stephen behind her. Jamie is abouy to run off the stage when he realises he has powers and turns around with an evil smile on his face. He throws Dakota, Nolan and Austin out of the football feild. He locks the gates which startles everybody and Jamie says in a demonic voice "You all are going to die tonight." and screams at them and uses his teleknetic powers to blow a huge gush of air at people knocking them down.

Retrieved from "https://fanon.fandom.com/wiki/TK?oldid=176380"
Community content is available under CC-BY-SA unless otherwise noted.