Steven Universe is a live-action 2019 film based on a TV series of the same name directed by Robert Stromberg, the director of Maleficent.

Steven Universe needs to save the day from evil along with his friends, the Crystal Gems. 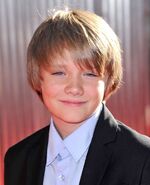 Peedee Fryman
Add a photo to this gallery

Retrieved from "https://fanon.fandom.com/wiki/Steven_Universe_(live-action_film)?oldid=464576"
Community content is available under CC-BY-SA unless otherwise noted.