Fanon Wiki
Register
Don't have an account?
Sign In
Advertisement
in: Games, Games With Positive Reviews, Spyro,
and 10 more

Spyro: A Hero's Tail is a remake of the 2004 Spyro the Dragon game of the same name. Adding on to the original storyline, it is treated more as a prequel to Spyro 4: Wings of the Dusk.

After the success of Spyro Reignited Trilogy back in 2018, TFB decided to choose a new game to remaster, though it was hard for them to decide on just one, creating a hiatus in between 2018 and 2022 (3 years). Eventually, they decided to bring back Spyro: A Hero's Tail, as it's the most popular, loved, and critically acclaimed game after the PS1 trilogy. They also made sure to create a 4th game following it as fans keep requesting, the development time of both games being another reason for the big hiatus (at least, it's big compared to the content that the Crash Bandicoot series has been getting, including a 4th game and a racing game remake). Nonetheless, both A Hero's Tail and Wings of the Dusk were finished, tested, and polished.

Activision also re-released the GameBoy Advance Spyro games, Spyro: Season of Ice and Spyro 2: Season of Flame on January 2, 2022, on the PSP (V3), WrayLite, Nintendo Switch (emulated), and Mobile. There is no difference between the two original Gameboy Advance versions other than the fact that the characters now use their Reignited designs, and most bugs and glitches are fixed.

As tradition in every other Spyro title, the cute purple dragon himself is your beginning character and main playable character. He has the same move set he has in Spyro Reignited Trilogy, except his Torch is a lot bigger in size. His best friend and pet, Sparx the Dragonfly, works the same way as well: once Spyro takes a hit, he turns blue, another hit, he'll become green and weary, and if Spyro takes one more damage he'll disappear, meaning that if Spyro gets hit a 4th time, he'll lose a life. Due to complaints about Sparx's redesign in the Reignited Trilogy, his design is altered a bit here, with his face shape resembling the original Hero's Tail and with brown eyes.

Ember is a female dragon with blue eyes, pink scales, a small face shape, a heart necklace and horns going out instead of on top like Spyro has. She is very kind and always tries to protect and help her big brother, Flame. Instead of rolling, she has a Wing Shield, which grants her the ability to be invincible to any enemy for 2 seconds as she covers herself with her wings. Due to the fact that her horns are shaped differently, she does not have a normal Charge. Instead, she runs, and when she nears an enemy, she spins automatically so that her horns hit them, leading to about 2x more Gems and/or Life Orbs than Spyro gets. She has a Torch, and a dragonfly health indicator, but they are different from Spyro's despite the fact that they work exactly the same way. The flames of her Torch are rainbow-colored, and her dragonfly companion, Candy, has circle-shaped antennae, no legs, and is multicolor as well. When Ember takes a hit, he turns red, when she takes two hits, he turns dull and a gross brownish-grey, resembling a rainbow both when all colors are mixed together, and a rainbow with no color anymore.

Flame is a male dragon who seems quite similar to Spyro at first, but has a long snout, is a bit taller (but not by too much), and has different head scales and his horns have more rounded ends. As his name may suggest, while the other 2 have regular movesets, Flame is all about fire. His Torch is scarlet red (so it doesn't clash with his body color), and hits really far away. While he does charge, if he stays in Charging mode for 5 seconds, he will get fire on his horns, making them appear way larger and when are hit by an enemy, produce 5x more Life Orbs and Gems than a regular Charge. Though it doesn't do anything to enemies, his roll features him rolling in his flames. His dragonfly, Spikes, is green and has legs. When he gets at his lowest health point, he turns dark grey, resembling coal.

These characters are playable, but are only playable and needed when you need to retrieve an item in order to progress through the story.

Sgt. Byrd, introduced in Spyro 3: Year of the Dragon, is a penguin who was raised by hummingbirds (which is where he learned how to fly) and always carries his rocket launchers and wears an army helmet. At some point, he exchanged his weaponry for a Rocket Launcher Jetpack. He is needed to get a Dragon Egg and a Light Gem (since minigames aren't repeated in the remake, Sgt. Byrd gets them both in one run).

Blink is a young mole and nephew of the Professor. Being a mole, Blink has the ability to dig through dirt. He also has some gadgets created by his uncle, the Professor. His weaponry consists of Blink bombs (can carry 10 at a time) and two laser-cannons which are connected to his gloves. WIP

Since Spyro's last adventure (Year of the Dragon), all has been at peace in the Dragon Realms. Unfortunately, Gnasty Gnorc, hater of peace and joy, wanted to send out someone to destroy everything once again, as he could no longer get to the Dragon Realms, being banished and all. He sent out Red, a former Dragon Elder, who was the one who first discovered Gnasty and trusted him enough to befriend him. Red used to be the wisest and kindest Dragon Elder of all until Gnasty had corrupted him and turned him dark. Red is back and is attempting to destroy the Dragon Realms with his Dark Energy.

Fortunately, Spyro is not alone--two new friends, Flame and Ember, are longtime fans of Spyro after hearing about his feats and tag along with him on this journey.

The Professor saw everything that happened, and quickly called Spyro and Sparx to his place. Spyro and Sparx head out and see Tomas, one of the (current) Dragon Elders. "The red dragon is named Red. He used to be a good friend of mine and a Dragon Elder like us...until Gnasty Gnorc ruined his life..." Tomas mentions. "Red? Hah! Imagine being named after your scale color!" Spyro says. "Oh, don't let his silliness and friendly-seeming nature fool you. He's never gonna be the same...he's a huge threat."

Spyro finally makes it to Red, the one dragon everyone in the Realms fears.

After absorbing all of the Dark Energy, Red takes on a new form called Carmine Red.

After 'Final Battle-Red-Phase 2', Red hits Spyro with some of the Dark Energy as he falls, Spyro not noticing.

At the end, Spyro is walking with Ember and Flame. Suddenly, Spyro starts shaking and twitching around. He starts to turn black and grey, and his eyes turn red, but he quickly goes back. Flame: "Woah...what was that just now?" Ember: "I hope you weren't hit by Red's Dark Energy..." Spyro: "I don't think I was, but I don't know for sure...let's go home." 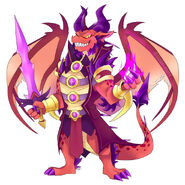 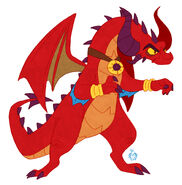 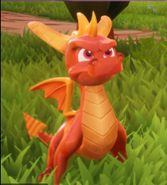