Shield 2 pick up directly after the events of Shield, with the events explaining Colonel Dana's return to Earth. The story dives deeper into the society of the Enclave, their goals, beliefs, and alliances, as well as continuing Dana's story to put an end to the Enclave threat on Earth as well as another Shield. Shield 2 also introduces the character Inquisitor, an disgraced Enclave Saulosian who becomes a warrior and the Mukil. They are shown as large, hairy, bear-like beasts; although they do not don energy shields like the Saulosians, their immense bulk and strength allows them to absorb a large amount of damage before dying.

The game begins on the Cicle, the mobile capital city of the Enclave. The former Supreme Commander of the Fleet of Justice, Commander Hanir Dolek (voiced by Ron Perlman), is being tried before the High Council for his failure to protect Shield. Despite his insistence that the Purge hampered his abilities, the Hierarchs who lead the council, Path (voiced by John Hurt), Life (voiced by Christopher Lee), and Tranquility (voiced by David Tennant), deem him guilty of failing to protect the Sacred Planet. Dolek is then stripped of his rank and branded with the Mark of Shame by Vorus (voiced by Andy Serkis), the Marauder of the Mukil.

The story then turns to Earth's Orbital Defense Platform Manaus Station, where Colonel Dana Price (Emily Blunt) receives a new armor. Lucas Bishop (Keith David), who recently got promoted, arrives to take the Colonel to an awards ceremony overseen by Admiral Klaus Einsenhardt (Thomas Kretschmann) for the dual purposes of awarding meritorious acts and boosting the morale of the surviving human population and noted as a war hero (Dana has already received all medals except for the "Prisoner of War" medal). The festivities are soon interrupted by Gen (Asa Butterfield) reporting "15 Enclave Capital Ships holding position just outside the kill zone," signaling the start to the Enclave Siege of Earth. UE Marine forces along with Dana protect the station from the invading Enclave Naval infantry but other stations were destroyed by the Enclave. After sending the bomb that the Enclave had placed on the station back into space (destroying several ships) he landed on the hull of the UE condor, Say My Name. The condor heads to the city of New Rio de Janeiro to fight off the Enclave troops, led by Tranquility. After the Enclave invasion force is halted by the UE defenses, Tranquility flees Earth with Simon Jovian (Thomas Brodie-Sangster), Captain Jovian's son, and his detachment in pursuit on the Say My Name. The hasty in-atmosphere jump devastates the city of New Rio de Janeiro; destroying the Space Elevator and scattering its wreckage for miles around.

The story returns to the disgraced Saulosian Commander, Hanir Dolek, who is given a chance for redemption by the Hierarchs Path and Life by taking up the mantle of Inquisitor and the imminent mortality it entails. The new Inquisitor becomes the will of the Hierarchs, seeking redemption by completing the impossible task assigned to him. Hanir Dolek is tasked with the assassination of the Heretic Leader Lak (voiced by Robert Davi), who is disillusioned with the Enclave following the events of Shield 4 up to its destruction. Hanir Dolek tracks the Heretic Leader throughout the gas mine (battling the Heretics and the Purge) alongside Commander Kleiv Suvo (voiced by Brad Dourif), where the Heretics sought refuge. When Hanir Dolek is finally able to face the Heretic Leader, Lak asserts his belief that the Hierarhcs have lied about their religion. Punctuating this with the entry of B1-R3 Prism (voiced by Benedict Cumberbatch), whom both Saulosians consider to be an Oracle of the Precursors, the ancient race the Enclave hold as gods. Before Hanir Dolek could learn more of the claims, the battle resumes, and the Heretic Leader is killed before any meaningful discourse takes place. Vorus appears to extract Hanir Dolek and Prism, further preventing him from learning any further information from Prism. He leaves, not knowing what caused the Heretics to betray their sacred oaths to the Enclave.

Turning back to Dana's story, Simon Jovian ship exits hyperspace with Tranquility unaware that he had been followed. To the surprise of the pursuers, they discover that Tranquility led them to another Shield World. Jovian sends Spec Ops soldiers to capture Tranquility while Say My Name is repaired; Dana is dropped onto the surface of Shield 5 with SpecOps to remove Tranquility. In the course of pursuing Tranquility, Dana discovers, with the aid of Gen, that the Hierarch intends to personally activate Shield, in the belief that it will propel true believers on their religion. In order to buy time to acquire the Activation Key before the Enclave can, Jovian orders Dana to kill Tranquility, a mission he successfully achieves. But before being able to make his escape, Cicle and its escort arrive and attempted to kill Dana by bombarding the area. She survives by jumping into the lake surrounding the structure in which she encountered Tranquility. Incapacitated from the shock of the Enclave bombardment, Dana is last seen being dragged into the depths of the lake by tentacles belonging to a sentient creature.

The story now shifts back to Hanir Dolek on the Cicle, in orbit around the planet. The Hierarchs had declared Tranquility's death to be the Saulosian' failure, and they were removed as the protectors of the Hierarchs, who bestow the role to the Mukils, causing more tension between the Mukils and the Saulosians who are already at odds with each other. With the new world discovered, Path and Life inquire Prism on how to activate it, and dispatch Hanir Dolek to recover the Opener which will light the planet. Making his way through the War Zone facing scores of Purge, Humans and Mechanical Guardians on the surface of Shield 5 seeking the Activation Key, Hanir Dolek makes his way into the Mausoleum and captures the Key along with Jovian and Bishop after they recovered it from its protective housing. Before he can take possession of the Key, Vorus again intervenes in Hanir Dolek's task. After taking the Key into his own personal possession, Vorus then reveals that the Hierarchs intended for his death to oust the Saulosians. His treachery revealed, Vorus knocks Hanir Dolek unconscious down a shaft in the Key chamber to the abyss below.

Beneath the Mausoleum, Dana finds herself in the clutches of the Overlord (voiced by Frank Welker), the creature that acts as the sentient intelligence of the Purge. Although Hanir Dolek had fallen from a great height, he is saved from plunging to his death by the Overlord's tentacles. It is within the Overlord's chamber where Hanir Dolek and Dana Price meet. In addition, Tranquility is infected and assimilated into its mass. Also introduced is Q8-C1 Light (voiced by Tom Kenny), droid Supervisor of Shield 5. Both characters act as exposition to Hanir Dolek, as Tranquility remains steadfast to his faith, and the Supervisor is fully aware of its status as a weapon. Hanir is further led to question his faith by both Dana and the Overmind itself, as they both try to convince the Saulosian that the Enclave's belief on the Shields is a lie, revealing that the Shields destroy life, not save it. This information, as well the information of the imminent genocide of the Saulosians lead Hanir Dolek reluctantly joining Dana in the mission to stop the world from being activated. The Overlord sends both Dana Price and Hanir Dolek to different locations to help stop the Key from reaching its destination. Dana was sent to Cicle to retrieve the Key while Hanir was sent to the area where the Control Room of Shield 5 to halt the Enclave from activating the rings.

Dana then enters the middle of a broadcast by Path. After escaping assassination, Path and Life flee to the Stalion, and formally transfers command of the Enclave Military to the Mukil. Dana chases him, killing many Enclave troops on the way, witnessing the conflict between the Saulosians and Mukils. Dana also saves a group of Marines along the way. Meanwhile, the Purge, under the control of the Overlord, crash into Cicle using the Say My Name.  When Dana nearly meets Path, she finds Life being infected by the Purge; the Hierarch tells the Super Soldier that Path is going to Earth to "finish what we started." In her efforts to reach the Precursor Stalion, she has to fight her way through the Purge and the Enclave forces. After boarding the Stalion through an energy conduit, she leaves Gen behind, but promises that she will come back for him.

Meanwhile, Hanir Dolek is teleported to near Shield's control room. There, he finds many dead Saulosians, which were, no doubt, killed by the Mukils. With the help of a few deployed Saulosians, and sympathetic Ugus and Sbaosis, he fights his way to meet Kleiv Suvo, who is surprised to hear that the Mukils murdered the Councilors. Seeing Vorus land on Shield's control room, the Saulosians fight their way to a Seraph, where Sergeant Bishop is held. Bishop takes control of the Seraph and forcefully initiates an uneasy alliance between the Humans and the Saulosians. With the combined efforts of Bishop and Dolek, the Seraph breaches the Control Room doors by using the main energy cannon on the Seraph, and Dolek enters the Control Room to confront Vorus. In the Control Room, he hears the truth of the Shields directly from B1-R3 Prism. Still blinded by faith, Vorus forced Simon Jovian to activate Shield. Many Zealots and Councilors aid Dolek in his final fight against Vorus, and eventually after a long and tough fight managed to kill him. Once Vorus is killed, Simon grabs the Key just in time to stop Shield from firing. However, Prism says that this has activated a fail safe protocol, causing the Shield to send a signal to the rest of the Shield Array, putting them on standby for remote activation from the Core.

The Precursor Stalion arrives at Earth with Dana Price onboard. She alerts Admiral Klaus of her presence, and tells him that she is "ending this war."

In a post-credit scene, it appears that Cicle has been completely taken over by the Purge, as thousands of Purge spores are visible throughout the air, floating along the view. The Overlord speaks of satisfaction of being free of his "empty reign," and suddenly Gen appears sitting on a pedestal in the room. The Overlord then states that there are questions that linger in his mind, which Gen must answer. Gen replies, "Alright...tell." The screen then turns black before any question is heard. 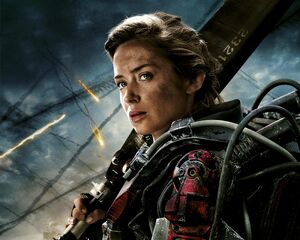 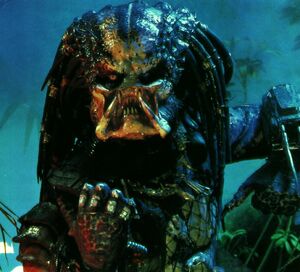 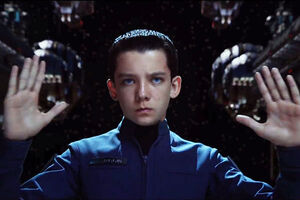 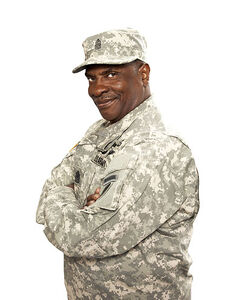 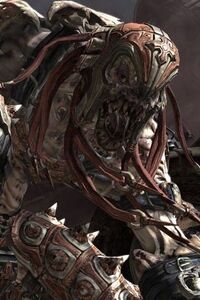 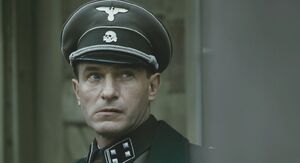 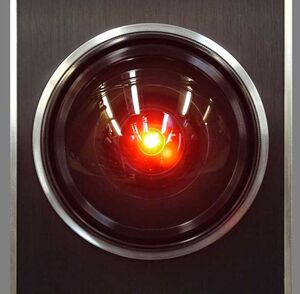 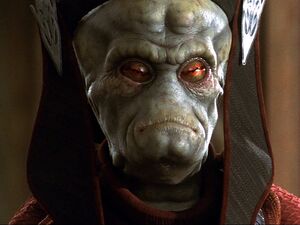 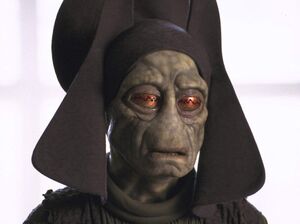 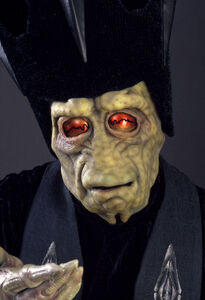 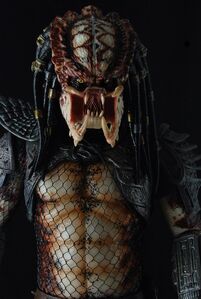 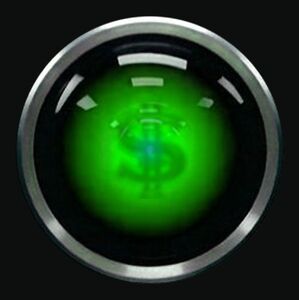 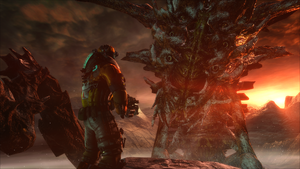 Overlord
Add a photo to this gallery 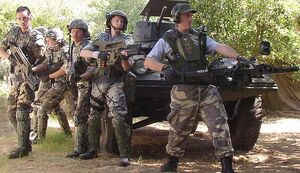 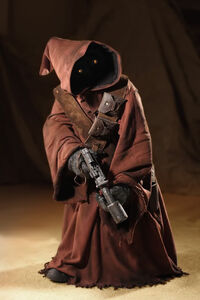 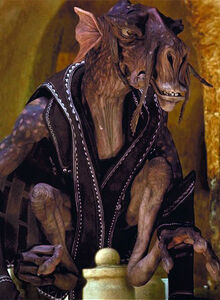 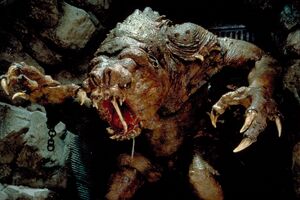 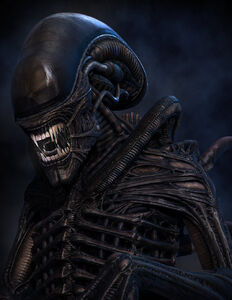 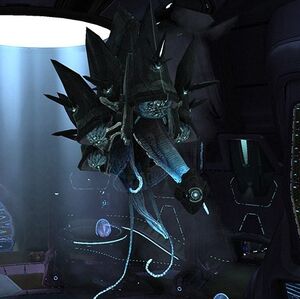 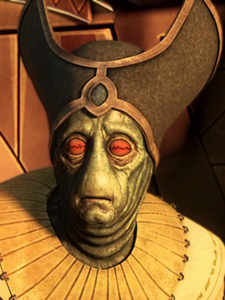 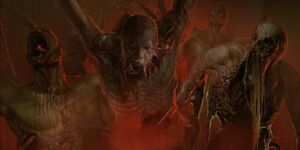 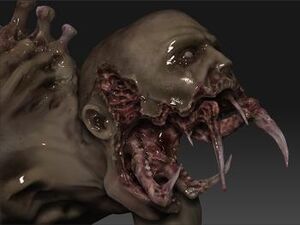 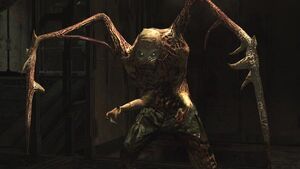 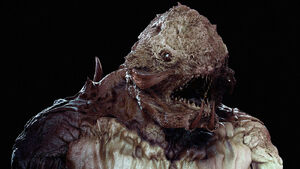 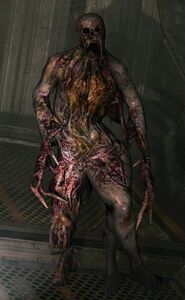 Purge Infector Form
Add a photo to this gallery 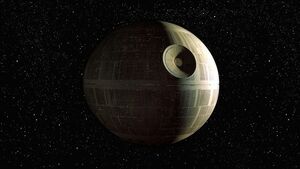 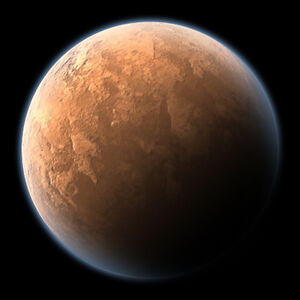 UE Say My Name
Add a photo to this gallery

Retrieved from "https://fanon.fandom.com/wiki/Shield_2?oldid=204457"
Community content is available under CC-BY-SA unless otherwise noted.