Sea crocodiles are a group of crocodilians that are descended from a group of Metriorhynchids that made it into the Late Cretaceous, survived the K-T extinction, diversifying into many different species, and made it into modern times, but it is unknown what species of Metriorhynchid all known Metriorhynchid descendants alive today are descended from. They compete successfully with toothed whales, despite the toothed whales still flourishing. They range from the size of an Australian freshwater crocodile to about the size of sperm whale, depending on a species. They are all diurnal carnivores, with many filling different niches from each other, like small Nothosaurus-like forms that feed on aquatic worms and digging crustaceans, to giant pliosaur-like forms that prey on large cephalopods and small pinnipeds and whales. Some species still has to return to land to rest and/or to lay eggs, but some species have evolved to be fuoly adapted to life in the water that they no longer could crawl on land, so they developed live birth to make up for this and have developed the ability to sleep floating on the surface with their snouts sticking out of the water so they don't drown in their sleep. There are more than 375 different species of sea crocodiles found across the world's oceans and some rivers. 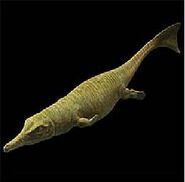 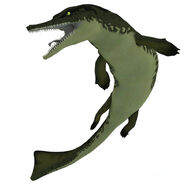 The predator Z (Pliosuchus Primevalii)
Add a photo to this gallery
Retrieved from "https://fanon.fandom.com/wiki/Sea_Crocodile?oldid=424988"
Community content is available under CC-BY-SA unless otherwise noted.