Beau Nichols-Gutted and since in bathroom kirby

Mr.Alexander Collis-disfigures the face was beaten with a fire extinguisher

Nico LaCosta-he was stabbed in the stomach

ALEX Is ATTAKCED By GHOST Face In THE LIBRARY

sidney, gale and dewey do not return in the following movies 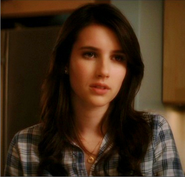 Official Reynolds
Add a photo to this gallery
Retrieved from "https://fanon.fandom.com/wiki/Scream_6_(Sc6eam)?oldid=199706"
Community content is available under CC-BY-SA unless otherwise noted.