Maureen Evans (Keke Palmer) and her boyfriend, Phil Stevens, (Brandon T. Jackson) enter a theater to watch the movie, STAB, based on the Woodsboro Murders. Phil goes to the bathroom and gets attacked and dragged into the janitor's closet. Ghostface comes out with his jacket and enters the theater. Maureen assumes he's joking until she sees blood on the jacket. She is then stabbed and chased to the front of the room where everyone watches her die.

Tatum Riley (Anna Kendrick) wakes up to her roommate, Hallie McDaniel, (Jessica Lucas) shaking her. She shows her the news and Tatum rushes to find Randy (Logan Henderson) in his class. In Randy's film class, He is arguing with his friend, Mickey Altieri, (Zac Efron) about how sequels are awful. They both make valid points until Tatum interrupts their 'Nerd talk' and has Randy follow her. They discuss the murders and run into their friends, Derek, (Bobby Campo) Dawn, (Elizabeth Gillies) Hallie and Mickey.

Billy Loomis, (Ansel Elgort) now a reporter, is with his cameraman, Joel Jones, (Arlen Escarpeta) getting ready for a press conferance. The friends watch as Billy questions the sheriff and Randy rants about Sidney. Tatum rises to Billy's defense.

Sorority Sisters Lena (Alexa Vega) and Michelle (Dianna Agron) run into rival sorority sister, Cici Cooper, (Chloe Grace Moretz) and they point out Tatum. Cici wants her in her sorority but the others tell her off and walk to invite Tatum to their sorority mixer. Hallie wants to get into their sorority as well but they ignore her.

Billy walks to Tatum to ask questions and she tells him that he acts like Gale. He follows her more until she finally punches him in the face, earning cheers from Randy. The group walk off as Billy stands and heads to his van, running into Judy Hicks, (Aimee Teegarden) now a cop in woodsboro. She tells him to leave before she shoots him but he denies.

Tatum is walking to her dorm and bumps into Cici, making both their belongings fall to the ground. They become friends and Cici tells her not to join Lena and Michelle's sorority, but to join hers. Tatum agrees and walks off to her dorm.

Tatum arrives at the party and the girls try to get her to sign up for their sorority, but she remembers Cici and denies them.

Cici gets phone calls from an unknown person and starts panics. She gets chased up the stairs and stabbed twice, being pushed onto the balcony through the glass door. She is then lifted and thrown over, but grabs hold of the roof under them and jumps to the ground. She runs to the next house but is tackled and stabbed multiple times.

Lena and Michelle tell everyone about what happened at the sorority house and everyone rushes to see. Tatum sees Cici's body and runs back to the other houses. Billy is then being interviewed by a reporter, Scott Presley. (Jensen Ackles) Billy snaps on him and leaves the scene, running into Randy and Judy. They decide to meet up the next day.

Tatum is in the library with Derek and he tells her everything's going to be fine. She snaps at him and tells him nothing will be fine again. He leaves and she gets a call. It's the killer and she stands to leave, but a stack of books are pushed onto her. The killer appears and tries stabbing her, but she escapes and leaves the building.

Meanwhile, Billy, Randy and Judy are together and Billy's phone is ringing non-stop. Randy takes it but it's the killer. Billy and Judy search for the killer, but Randy is attacked and dragged away. Joel arrives and Billy and Judy take him to find Randy. Billy feels something drip on his face and they look up to see a gutted Randy, hanging in the tree.

Tatum and Dawn are being taken to a secluded area by two cops. Meanwhile, Derek, Lena and Michelle are in the performing arts building and are looking around and are attacked, Derek knocked out, Lena trapped and Michelle killed. Billy and Judy enter and look around as well, discovering the killer was recording them and they find Joel's equiptment. Judy sees the killer at the projecter and chases him but Billy is attacked and chased around the building. He locks himself with Lena and they wait for the killer to leave.

Tatum and Dawn are with the cops when they stop and the cops get out and look around. They are killed and the killer drives the car. Tatum and Dawn try to escape and they succeed as the car crashes. The girls head back to the college.

Hallie is in her bathroom shaving, when she gets a call. The killer asks her trivia but she gets it wrong. She closes the door, but it opens and the killer shoves her into the bathtub, getting the curtain tangled around her and stabs her multiple times.

Tatum and Dawn enter onto the stage and are greeted by ghostface. Derek is there, tied up. He is then shot by another killer. Billy and Lena enter at gunpoint with Scott, who Tatum reveals is really Sidney's brother, Ethan Prescott. Ethan shoots Mickey, Lena, Dawn and Billy run. Mickey shoots Billy and Ethan at Lena, they both fall off stage as Mickey falls down dead, Dawn gets to the exit. Tatum argues with Ethan about Sid's death and Tatum tricks him into thinking Mickey's alive and escapes backstage and presses various buttons, making the stage collapse on him. Ethan then traps her in an arm lock and is about to snap her neck, but he's shot by Judy. Tatum takes his gun as Billy and Lena get back up and Billy takes Mickey's gun. Tatum shoots Ethan in the head. Mickey comes back to life and the three shoot him multiple times.

The four make their way out when Joel appears and apologizes for not showing up. Tatum hugs him and Lena sees him reach for the knife in his back pocket. She takes Billy's gun and shoots Joel through the side of his head. The four look to see the cops enter.

Scream 3 was announced in 2016, three months after Scream 2 was released. Anna Kendrick, Ansel Elgort and Aimee Teegarden had already been confirmed to return to their respective characters, as well as Alexa Vega and Elizabeth Gillies. It was later revealed the movie would be taking "A different turn from the original." Soon, it was revealed that the film was about a horror movie cast on an island.

Abigail Breslin had been cast as Melissa Parks, a rising actress who is playing Judy in 'Stab 3,' best known for her role on the #1 teen drama, 'Sorority Massacre.' Dylan O'Brien had also been cast as Jay Clarkson, Tatum's new best friend.

Also cast were Kate Todd, Emma Stone, Amber Riley and Finn Wittrock, playing four actors from stab 3. Ariana Grande also joined the cast to play herself. Also casted was Denis O'Hare, playing Marcus West, the movie's director. Many others were cast but it is unknown who they play, including Nina Dobrev, Diego Boneta and Lily Rabe. 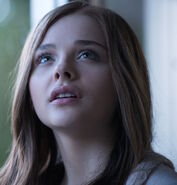 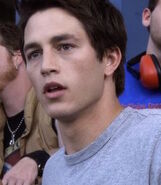 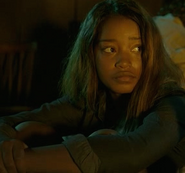 Sidney Prescott
Add a photo to this gallery
Retrieved from "https://fanon.fandom.com/wiki/Scream_2_(JC_Remake)?oldid=250637"
Community content is available under CC-BY-SA unless otherwise noted.