Scream: The Black Van takes place after the events of Jill Roberts's Protégé. Frank and Emma see a black van parked outside of the police station. A woman is then run down by the black van when she is crossing the street, the woman was Missy's mother. Frank and Emma shoot at the van but miss they see the driver is wearing a Ghostface costume a few blocks the driver takes off the costume and then gets out of the van it is revealed to be Lauren Malloy. 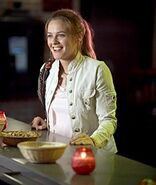 Missy Gibson
Add a photo to this gallery
Retrieved from "https://fanon.fandom.com/wiki/Scream:_The_Black_Van?oldid=135195"
Community content is available under CC-BY-SA unless otherwise noted.