Start a Wiki
Princess Athena is an upcoming live-action fantasy film written and directed by Guillermo del Toro, starring Joey King in the title role. It is an adaptation of the classic video game Athena (released for the arcades, consoles and home computers in the mid-1980s), which was itself loosely based on the figures from Greek mythology.

Athena is the young princess of the Kingdom of Victory, a magical land that floats above the clouds. Feeling that the pampered life of a princess is not for her, Athena yearns for excitement. One day, she disobeys her parents and goes to explore the off-limits underground chambers of the castle. There, the Forbidden Door appears and opens for her. When the princess dares to take a step into the gate, this causes her to fall from the heavenly kingdom to the untamed wilderness below.

She is able to glide safely down the air currents with some help from her long gown, but it is pulled off her body by the draft, leaving her in her undergarments to touch down on a wild forest almost naked. She soon discovers that the area is roamed by half-man, half-beast armored warriors, some with the head of a boar and others disturbingly horse-faced, and also creatures such as winged serpents, trolls and slimy blobs. Finding her own great fighting spirit, Athena decides to battle her way to safety, stealing weapons like swords and maces from defeated warriors, and searching around for the hiding spots of magic implements and even armor of a fitting size with which to cover her exposed body. But first, she will have to fight the beastly troopers unarmed and uncovered.

Eventually, the ruler of the land, the monstrous, cruel and petty Emperor Dante hears of the young girl that is fighting his soldiers, and demands that she is found and brought to his dungeon. Little does the tyrant know that Athena is going down the path that leads to him, a road that crosses caverns and cliffs, fiery and frozen areas lorded over by monsters second only to Dante in size and menace. 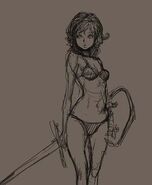 Athena with her dress

Athena with armor
Add a photo to this gallery
Retrieved from "https://fanon.fandom.com/wiki/Princess_Athena_(Live_Action_Film)?oldid=444549"
Community content is available under CC-BY-SA unless otherwise noted.