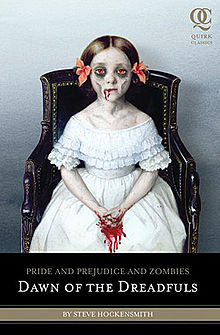 Year 2013 and the Bennettes move into a amercian mansion on a plantation where severl murders happend. One of there friends died and they attend the funneral As the ends there friend breaks out of his coffin and Mr. Bennette kills the zombie. Mr. Bennette decides to train his five daughters Lizzy, Jane, Mary, Lydia and Kitty in zombie killing style. He turns his green house into a dojo and hires Master Hawksworth to train the girls. The grils don't like the idea of using weapons but then they get the henag of it. Master Hawksworth takes the grils to a lake  where zombies are coming out of. They kill them and when Lizzy kills her the girl says "Were the Dawn of the Dreadfuls and we will all kill you and walk the Earth."

Sudddenly a scientist named Doctor Kilepenny arrives in Haydonville with dreams of domesticating zombies. Lizzy befriends Doctor Kilepenny and he says that he can help her. Lizzy and Lydia are woken up by growling from inside there house somewhere. They find a zombie and they bash his head open. They show Master Hawksworth who is staying with them. Master Hawksworth drags the body to the lake where he finds his brother Doctor Kilepeeny. They both demand to know what eachother are doing here. Lizzy is woken up in a trance and she walks out of the mansion and into the woods where she finds a man. He says "Dawn of the Dreadfuls will start soon."

Retrieved from "https://fanon.fandom.com/wiki/Pride_and_Prejudce_and_Zombies?oldid=179176"
Community content is available under CC-BY-SA unless otherwise noted.