Pranker Krueger is one of the main antagonists of the You Killer franchise. He is the second youngest and tallest of The Horror Children from the Deep End at 13. He along with his brothers and sisters were created by accident from Shima when an experiment gone wrong. However, he was created as the son of Freddy Krueger, as he can kill people in their dreams, and absorb their souls, along with his siblings. Along with the viewer who was found and rescued by Doopie, who took care of them and became a part of her family. While the other children were seperated to other worlds, when he was created, he was transported to the Neither realm. His father Freddy Krueger told him that he was his new father and told him to kill all the children from Storybook Village. He was soon in raged when he found out that the viewer and Doopie had killed his little brother Lenny. He seeked revenge on them along with their new friend and brother Bluey Burgeons, but this failed when Freddy told him that he was no longer his father, but now the viewer's new father, as Stocking was the new mother, where she was still 16, and Freddy was an adult/ Pranker ended up dying when the sun started to rise, and Bluey, Doopie, Stocking, Freddy, and the viewer dragged him to the light as he screamed in agony as he fades away, with his clothes and clawed hand drops on the floor. He was later resurrected to get revenge. He is voiced by Benjamin Diskin

Pranker is taller than his other siblings, he also has a very similar appearance as that of the rowdyruff boys. He has big blue eyes, a baseball cap with light blue and dark blue zigzags. Long red hair that goes to his pants, a dark red and dark blue striped shirt, a brown claw hand similar to Freddy Krueger, Red pants, and brown shoes.

You Killer 2: Super Why

"That's the kid who killed my brother Leray. I'm gonna make them pay. Make em suffer till they break apart. Lenny, if you can hear me, I will avenge you. HAHAHAHAHAHA." (Making his introduction)

"No worries father, the new storybook nightmare has just begun" (Before he heads to get Super You.)

"Jack went up a beanstalk to be killed by Pranker Krueger." (After he pushes Jack of the beanstalk.)

"Tell that to Jack." (After pulling up the pail to the well, which caused Jill to drown.)

"My little bro, Lenny is dead because of you. And now, I will have vengeance cause I am a living nightmare. HAHAHAHAHA." (When he first encounters You.)

"I love the taste of children's blood." (After killing Red Riding Hood.)

"You shall know me as, King Pranker." (Before stabbing Princess Pea with her own wand.) 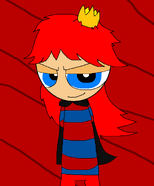 King Pranker
Add a photo to this gallery

"Guess what this is. "Nega Pranker" (Before he tears part of Super Why out)

"Not every story has a happy ending, sometimes the villain can win."(Before he kills Super Why by shredding him to pieces.)

"Poor little angles. You're all in my universe now!" (After The viewer, Doopie, Bluey, Panty, and Stocking all get sucked into Pranker's dorm of hell.)

"You chose poorly fucking angle." (After Panty sacrafices herself to save her friends and Stocking.)

"Looking for something missy?" (After opening the closet revealing Brief's bloody head.)

"It may be hard to believe, but the real reason Stocking is still here, is that I'M the actually demon. Right after Corset's death, which was real by the way, he is in dead for good. I disguised myself as Stocking, and transformed Garterbelt into Panty. Now what happened to the real Panty and Stocking? Well, they went back to their earth realm house where they decide to live for all eternity. So, I chopped Garterbelt into 666 pieces. It wasn't the real Panty, and I wanted people to believe Stocking was actually a demon. Oh and that bitch Corset, who was Brief's penis, that was Brief dreaming before I murdered his stupid ass." (Revealing how the real ending of Panty and Stocking with Garterbelt was.)

"You!, you bitch, how could you do this to your own son? I did everything you wanted." (After realizing Freddy Krueger was no longer his father and is the father for the viewer and apparently husband of their new mother Stocking.)

Pranker actually made the credits that Stocking was a demon where she was not.

Retrieved from "https://fanon.fandom.com/wiki/Pranker_Krueger?oldid=450750"
Community content is available under CC-BY-SA unless otherwise noted.