Steven R. McQueen As Jeremy O'Conner/Sean Little Brother and Bella Cousin he is gay in love with her ​​ best friend

Kelsey-chest and half-eaten food and torn hand side

Jeff-Piranha drag to the lake to be devoured

Arabella-face eaten by a piranha

Thug Lautry:Stabbed in chest by dagger(Sean) is pulled and pushed by tyler, Tyson beautiful lake so it is eaten 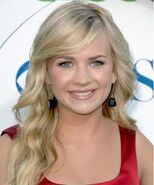 Add a photo to this gallery
Retrieved from "https://fanon.fandom.com/wiki/Piranha_Rivers?oldid=175772"
Community content is available under CC-BY-SA unless otherwise noted.