Omegas VS Hunters (also known as OVH or OVH: Battle of Gods) is a 2020 American/British/Spanish science fiction horror and action film directed by Guillermo del Toro and starring Anne Hathaway, Idris Elba, Thomas Brodie-Sangster. It is the first installment of the Omegas VS Hunters franchise, adapting a crossover bringing together the eponymous creatures of the Omega and Hunter series , a concept which originated in a 2016 comic book. del Toro, Ridley Scott and Alfonso Cuarón wrote the story, and adapted the story into a screenplay. Their writing was influenced by Aztec mythology, the comic book series, and the writings of Erich von Däniken.

Set in 2020, this film follows a group of archaeologists assembled by billionaire Charles Stryker Ashford (Sangster) for an expedition to the mysterious moon of LV-1004 to investigate a mysterious star map. Ashford hopes to claim the find for himself, and his group discovers a pyramid below the surface of a whaling station. Hieroglyphs and sculptures reveal that the pyramid is a hunting ground for Hunters who kill Omegas as a rite of passage. The humans are caught in the middle of a battle between the two species and attempt to prevent the Omegas from leaving the moon.

Omegas VS Hunters entered production in April 2010, with extensive design phases during which the technology and creatures that the film required were developed. Principal photography began in March 2011, with an estimated US$120–130 million budget. The project was shot using 3D cameras throughout, almost entirely on practical sets, and on location in England, Iceland, Spain, and Scotland. It was promoted with a marketing campaign that included viral activities on the web. Three videos featuring the film's leading actors in character, which expanded on elements of the fictional universe, were released and met with a generally positive reception and awards. Omegas VS Hunters was released on June 1, 2020, in the United Kingdom and on June 8, 2020, in North America. It grossed over $403 million worldwide. Reviews praised both the film's visual aesthetic design and the acting, most notably Hathaway's performance as the explorer Seline. However, the plot drew a mixed response from critics, who criticized plot elements that remained unresolved or were predictable.

Thousands of years ago, Hunters are seeing hunting Omegas in a distant planet. However, the Hunters become unmatched by the numerous Omegas and their majority is killed. The Hunters swear eternal conflict against the Omegas.

In 2020, archaeologists Seline Wayne (Anne Hathaway) and Dallas Crawford (Idris Elba) discover a star map in Scotland that matches others from several unconnected ancient cultures. They interpret this as an invitation from humanity's forerunners, the "Hunters". Wealthy Charles Stryker Ashford (Thomas Brodie-Sangster), the CEO and young founder of Ashford Industries, funds and assemble an expedition to follow the map to the distant moon LV-1004 aboard the scientific vessel Pandora. The team includes archaeologists, linguistic experts, drillers and mercenaries. Arriving in some months, Mission director Guido Carbonelli (Giancarlo Gianini) informs them of their mission to find the Hunters, and not to make contact without his permission.

The Pandora lands on the barren, mountainous surface near a large artificial structure, which a team explores. As a Hunter ship reaches LV-1004's orbit, it blasts a shaft through the ice towards the source of the heat bloom. When the humans arrive at the site above the heat source, an abandoned whaling station, they find the shaft and descend beneath the ice. They discover a mysterious pyramid and begin to explore it, finding evidence of a civilization predating written history and what appears to be a sacrificial chamber filled with human skeletons with ruptured rib cages.

Inside they find stone cylinders, a monolithic statue of a humanoid head, and the decapitated corpse of a large alien, thought to be an Hunter; Seline recovers its head. The crew finds other bodies, leading them to surmise the species is extinct. Crew members Whilhelm (James D'Arcy), Lisa Miles (Kerry Washington) and Zoran Khan (Faran Tahir) grow uncomfortable with the discoveries and attempt to return to Pandora, but become stranded in the structure when they get lost. The expedition is cut short when a storm forces the crew to return to the ship, but the pyramid's doors close, stopping anyone from getting out.

Inside the structure, a snake-like creature kills Whilhelm, and sprays a corrosive fluid that melts Khan's helmet. Khan falls face-first into a puddle of dark liquid. When the crew return, they find Whilhelm's corpse. Dallas separately discovers a control room containing a surviving Hunter in stasis, and a star map highlighting Earth. Seline then discovers that Ashford has been is dying of cancer. He explains that he wants to ask the Omega Supreme to prevent his death, and that was the main cause of the whole expedition.

Meanwhile, three Hunters land and kill the humans on the surface, making their way down to the pyramid and arriving just as the team unwittingly powers up the structure. An Omega Supreme awakes from cryogenic stasis and begins to produce eggs, from which facehuggers hatch and attach to several mercenaries trapped in the sacrificial chamber. Chestbursters emerge from the humans and quickly grow into adult Omegas. Conflicts erupt between the Hunters, Omegas and Humans, resulting in several deaths. Unbeknownst to the others, a Hunter is implanted with an Omega embryo.

Through translation of the pyramid's hieroglyphs the explorers learn that the Hunters have been visiting Earth for thousands of years. It was they who taught early human civilizations how to build pyramids, and were worshiped as gods. Every 100 years they would visit Earth to take part in a rite of passage in which several humans would sacrifice themselves as hosts for the Omegas, creating the "ultimate prey" for the Hunters to hunt. If overwhelmed, the Hunters would activate their self-destruct weapons to eliminate the Omegas and themselves. The explorers deduce that this is why the current Hunters are at the pyramid, and that the heat bloom was to attract humans for the purpose of making new Omegas to hunt.

A monstrous, mutated Khan attacks the Pyramid's and kills several crew members before he is killed by an super-armored Hunter. Ashford, Max and a team arrive deep to the structure, accompanied by Dallas. Ashford speaks to the Omega Supreme an attempt to explain what he wants. The Supreme responds by decapitating Ashford, impaling Max and killing his team, before reactivating the spacecraft. Dallas flees and warns Seline that the Omega is planning to hatch it's eggs on Earth, convincing her to stop the spacecraft.

The remaining humans decide that the Hunters must be allowed to succeed in their hunt so that the Omegas do not reach Earth. Unfortunately, as the battle continues, Dallas is killed as he defends Seline. Almost all of the humans and Hunters are killed, leaving only Seline and a single Hunter to fight against the Omegas. The two form an alliance and use the Hunter's self-destruct device to destroy the pyramid and the remaining Omega. Seline and the Hunter reach the surface, where they battle the escaped Omega Supreme. They defeat the Supreme by attaching its chain to a water tower and pushing it over a cliff into the water, dragging the Supreme to the ocean floor. The Hunter, however, dies from its wounds.

A Hunter ship uncloaks and several Hunters appear. They collect their fallen comrade and present Seline with one of their spear weapons in recognition of her skill as a warrior. As they retreat into space, a chestburster with Hunter-like features erupts from the dead Hunter.

Omega 5 and Sequel Before 20th Century Fox gave Omegas VS Hunters the greenlight, Omegas writer/director Alfonso Cuáron had been working on a story for a fifth Omega film. Omega director Chistopher Nolan had talked with Cuáron, stating "I think it would be a lot of fun, but the most important thing is to get the story right." In a 2018 interview, Nolan's concept for a story was "to go back to where the alien creatures were first found and explain how they were created". On learning that Fox intended to pursue Omegas VS Hunters, both Nolan and Cuáron believed the film would "kill the validity of the franchise" and ceased work on his story, "To me, that was Frankenstein Meets Werewolf. It was Universal just taking their assets and starting to play them off against each other...Milking it." After viewing Omegas VS Hunters, however, Cuáron remarked that "it was actually pretty good. I think of the five Omega films, I'd rate it third. I actually liked it. I actually liked it a lot." Conversely, Christopher Nolan had no interest in the Omega VS Hunters films. When asked in May 2021 if he had watched them, Nolan laughed, "No. I couldn't do that. I couldn't quite take that step."

The first actor to be cast for Omegas VS Hunter was Thomas Sangster, who played the character Stryker in Omegas and Omega III and the Ashford family members David and Klaus in Omega III and Omega Reborn. Although the Omega movies are set 550 years in the future, del Toro wanted to keep continuity with the series by including a familiar actor. Sangster plays billionaire Charles Stryker-Ashford, a character that ties in with the Ashforsd Industries. According to del Toro, Ashford becomes known for the discovery of the pyramid, and as a result the Ashford Industries models the Stryker android in the Omega films after him; "when the Stryker android is created in 550 years time, it's created with the face of the creator. It's kind of like Microsoft building an android in 100 years time that has the face of Bill Gates."

Del Toro opted for a majority of non-american cast including English actors Idris Elba, Tom Hardy and James D'Arcy, Faran Tahir from Pakistan, and Canadian actor and comedian Jay Baruchel. del Toro said, "There's a truly international flavor to the cast, and gives the film a lot of character." Several hundred actresses attended the auditions to be cast as the film's heroine Seline Wayne. Anne Hathaway was selected, and one week later she flew to Prague to begin filming. The filmmakers knew there would be comparisons to Omega heroine Maya Onegin and did not want a clone of the character, but wanted to make her similar while adding something different.

Del Toro reported in an interview that Dwayne Johnson was willing to reprise his role as Major Hank "Indian" Jones from Hunter in a short cameo appearance on condition that the filming should take place at his residence. Actress Emma Watson, who starred as Maya Onegin in the Omega series, said she was happy not to be in the film, as a possible crossover was "the reason I wanted my character to die in the first place", and thought the concept "sounded awful". 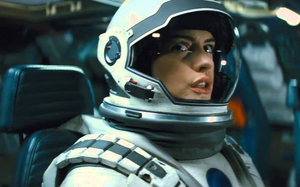 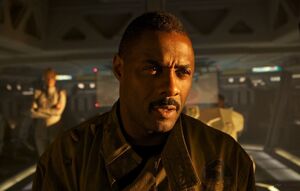 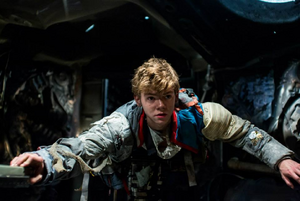 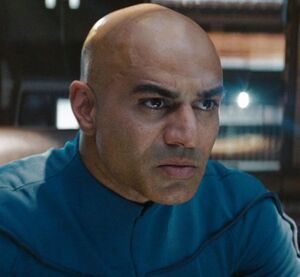 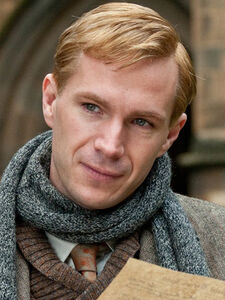 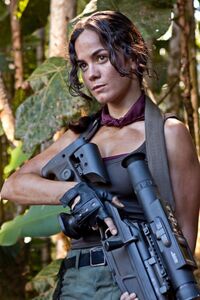 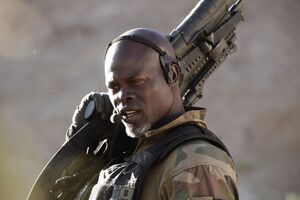 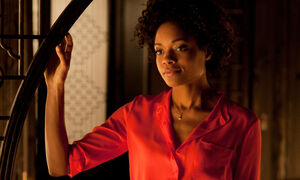 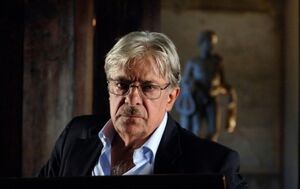 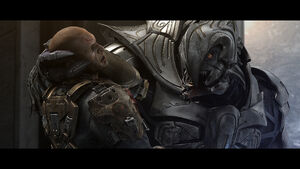 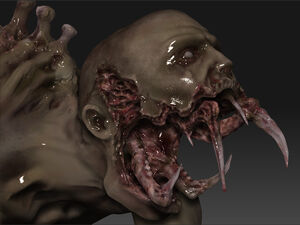 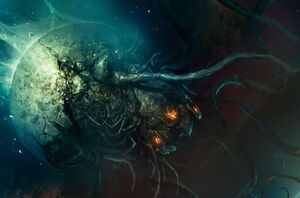 Omega Supreme
Add a photo to this gallery
Retrieved from "https://fanon.fandom.com/wiki/Omegas_VS_Hunters?oldid=163485"
Community content is available under CC-BY-SA unless otherwise noted.