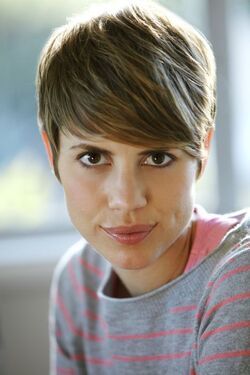 Liv
Status
Deceased
Died in
Saw VIII
Cause of death
Propelled by Justin Markman and Whitney Malice's bodies into the large Crossbow causing her to be impaled by it's mounted arrow
Age
19
Profession
High School Student, Umbrella High School DJ
Role
Test Subject
Reason tested
Being a thief of Music, Falsifying a story about the disappearence of Mark Hoffman to Pamela Jenkins under the instigation of Roston Bridges
Relationships
Diane Morglass (Bestfriend),

She is a student of Umbrella High School, New York and the bestfriend of fellow Umbrella Student Diane Morglass.

She is one of five Umbrella students recruited by reporter Pamela Jenkins in the film to investigate into the disappearence of Jigsaw Apprentice Mark Hoffman whom once was a student of Umbrella High School.

She was placed in a trap which played out as friend Roston Bridges' first test of his Jigsaw Game and was saved from death by the trap she was placed in but ultimatley met her demise later via the complications of a trap her fellow friends and Umbrella Students Justin Markman and Whitney Malice were placed in.

Olivia Samuels is a student at Umbrella High School who is introduced as Pamela Jenkins comes to the school campus and befriends the friendship group to which she belongs to and is asked to assist in investigating the dissappearence of Jigsaw apprentice Mark Hoffman.

Olivia like the others of the friendship circle is an avid Jigsaw fan and knows all his contraptions used in his killings and has her own built Reverse Bear Trap replica which she keeps at her house and plans on presenting to the school.

Olivia is abducted by secret apprentices David Tapp and Daniel Rigg who were well established Police Officers believed to have been killed by Jigsaw, Amanda Young and Mark Hoffman.

Her trap plays out as seeing she is a thief of music the music may steal something from her in common revenge: her hearing, and potentially her life.

Unless Roston acts in time and counter-acts the trap.

The head-phones begin to distribute large bombastic muscial sounds into Olivia's ears and will increase in volume until they blow her eardrums.

The head-phones are hooked up to a large Stereo Machine.

To stop the increasing volume which will first deafen her and then kill her Roston must stick his hand in the freezing cold ice water filled sinks to retrieve the four keys needed to unlock the four locks on her head-phones which will release her.

Roston fails to act fast enough in this however and Olivia is deafened but he ultimatley saves her life by retrieving all four keys before the time ticks out and Olivia is released.

Olivia then accompanies Roston onto the second test being Olivia's bestfriend and Roston's girlfriend Diane suspended above a blade machine by a chain.

The video explaining the rules of the game reveals she to have cheated on him many times.

Roston almost fails to save Diane but is egged on by Olivia and eventually comes to his senses and saves her at the last minute.

Olivia, Roston and Diane then continue on to the third test which oversees their friends Justin Markman and Whitney Malice suspended above by chain with a large crossbow device with large arrows aimed at them.

The trap requires Olivia along with Roston and Diane to insert their hands into wall chutes which contain the levers needed to lower away the crossbow until the timer ticks out and their chain releases them.

She inserts her arm cuts it on the glass shards within and then fails to pull the lever just like Diane fails to also leaving Roston the only one to have pulled one of the three levers.

This ultimatley results in Whitney and Justin being killed by a large arrow which pierces them both and Olivia standing in the wrong position upon relinqueshing her arm does not hear the time tick out and the chain releases the bodies of Whitney and Justin upon her.

Justin's foot upon landing kicks her straight at the Crossbow Device which then upon being rattled fires off another large arrow which impales Olivia through the back out the front.

Retrieved from "https://fanon.fandom.com/wiki/Olivia_Samuels?oldid=63689"
Community content is available under CC-BY-SA unless otherwise noted.