Jade was shocked to find Rem in the restroom! She ran past the bathroom stalls as he chased her. She opened one of them and slammed it at Rem before grabbing some toilet paper and throwing it at Rem. Jade was able to escape from the Boys' restroom.

She went to find Nicole. Nicole told her that they would call the cops. She also sent her pal, Julianna to go get Paige. Paige at the mean time, was awoken by a noise! It was Rem! He started attacking her and chocking her. Paige smacked him in the face and fell off the bed. She got up and started limping towards the hallway. There she bumped into Julianna. Paige frantically started telling Julianna what had happened. Julianna doesn't believe her and goes to Paige's room to check. There Rem snaps Julianna's neck from behind!

At the police station, Paige and Jade are told that Rem wasn't found.

Paige now living with her friend Rene decides that she wants to go find her aunt Jade who left with her friend Lilly to track down Rem but before Paige could leave Rene told her that her father Vance was coming over to see how she is doing & should at least wait till he showes up to make a decision, Paige agrees to wait.

Jade gets a lead to where Rem might be so her & Lilly go there but get there a little late they find a few pictures of people that Jade new when she grew up they take them with them & right before they were about to leave other people pull up it was Drew , Kirby, Pablo, & DC they came to find out if the rumor about Rem being there was true but found Jade & her friend Lilly walking out the building & about to leave they come to speak to Jade & Lilly if they have had any luck tracking down Rem both girls say that every time they get close enough Rem is always gone before they get there they ask Jade to come back home because Paige & Vance are both worried about her so Jade & Lilly both agree to go back with the others back to where her family & friends are waiting.

Paige is gonna meet up with her friend Anjel. They're gonna stay the night at Paige's mansion. Xemnas, Cillian and Hyper arrive at the sleep over. Meanwhile, Rem and Isabella stay outside with bonearrows and weapons to kill the 5 friends. During dinner, Cillian looks out the window and is shot in the head with a bone arrow. He falls to the ground, dead. Xemnas, Hyper, Paige and Anjel start freaking out. They decide to hide in the basement together. Paige calls Jade and tells her that they have been home invaded. Jade tells her that she'll be there.

Meanwhile, Rem goes breaks in Paige's mansion. While Isabella stays gaurding outside. Jade arrives at the mansion with a gun and her three buddies, Lilly, Kirby and Titania. Isabella spots them and starts throwing knives at them. Jade was shocked. She had known Isabella before and was dumbstrucked. Once Isabella ran out of knives she rushes toward the group to fight. Jade, Lilly and Kirby go inside the mansion to find Paige and her friends. While Titania is outside fighting with Isabella. Isabella grabs Titania in a choke neck position and slowly crushes her neck until she dies.

After killing Titania, Isabella calls Mateo and Hector and tells them to come over to Paige's mansion to help her and Rem kill Jade once and for all. Meanwhile, Rem finds Paige and her friends. He orders them to get out of the basement. None of them do and he slashes Xemnas' neck wide open. Blood splutters into everybody surrounding him and this is enough to cause Paige, Anjel and Hyper to come out of the basement. When Rem finishes tying them all to chairs, Jade, Lilly and Kirby all interrupt his doings.

Jade pulls out her glock. She points it at Rem's head and without any hesitation, shoots him in the head. This instantly kills Rem as he drops dead to the floor. Jade, not believing that she had just killed the man who killed many of her friends, meekly falls to the floor. Lilly helps her up, while Kirby unites Paige and her friends. Peace is settled, but interrupted when a knife is thrown at Kirby, it goes through his neck and slices his head off.

It's Isabella, Mateo and Hector!!!

Hectors tells Jade not to shoot or Anjel will never learn the truth. Jade is confused at this statement and so is Anjel, herself. Isabella then explains to Anjel that she was adopted. Everybody in the room is shock about this statement. Isabella then goes on to tell her that she's a John and that Joanna the killer is her sister. Anjel is obviously shocked by this. Jade can't take this crap anymore so she shoots Isabella in the throat, killing her.

Mateo and Hector act quickly. They both shoot at Jade, before escaping. Jade is wounded but not killed. Hyper quickly calls the cops and for an ambulance....

Back At The Hospital

When Jade wakes up, she is surprised to see Vance, Rene, Paige, Nicole, Mario and Patty. Jade asks what happened to her. Paige explains to her what happened as Jade recaps the memories of the previous night. Nicole tells her to take a rest and escorts everybody out of the room that Jade's at.

Rene, Mario and Patty decide to get waisted. They go to the hospital's bathroom. Once there, they lock the bathroom's door so no one can enter so they won't get caught. Little do they know that Mateo, is spying them through one of the bathroom stalls. Patty pulls out a pack of cigarettes and starts smoking as she hands a cigarette to both Rene and Mario. That's when Mateo comes of the stalls to attack them. He jumps on Patty breaks her skull open through her mouth with his bare hands. Mario and Rene quickly head to door. They're drunk so they forgot they had locked the door. Mateo approaches them, pulls both of the back by grabbing their from the hair. He twists Mario's neck multiple times and throws Rene against the bathroom's mirrors!

Rene slowly starts crawling as Mateo grabs a glass shard. He stabs it unto Rene's spine, killing her... 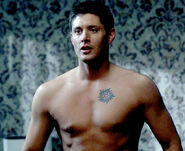 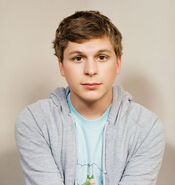 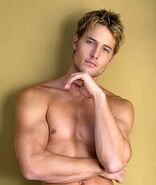 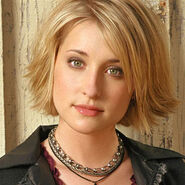 Michael B. Jordan as Xemnas

Sarah Habel as Anjel aka Giovanna 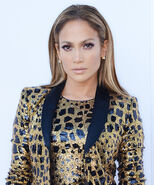 Jennifer Lopez as Isabella
Add a photo to this gallery
Retrieved from "https://fanon.fandom.com/wiki/Night_of_Horror_7?oldid=251423"
Community content is available under CC-BY-SA unless otherwise noted.