Night of Horror is a American Horror Movie.

Jade wakes up, showers, gets dressed & goes downstairs. Her phone rings, revealing it's her friend, Skarlet. She says that she is coming over with Career to have a little talk. Skarlet shows up minutes later with Career. The three talk about how John has made their lives, hell. Skarlet comes up with a plan, but says that "we would need more help" so she suggests, they should go see Cake & Fred to see if they can help, so they head on over there.

Cake answers the door and the girls tell him, what they are doing and he agrees to help but says, he will need Fred's help so they can get revenge on John. The four find Fred, out walking and tell him what they plan on doing Fred agrees to help. Meanwhile, John is with his friends Prince, Bya & Vap, when they hear rumours about a killer. John & his friends go to find Bog, they ask him if he has heard about the Killer he says he heared about it they ask if he wants to help find out who the killer is he agrees but only under two conditions. The first condition was if another friend of his named Metal could help they accept that condition Bog leaves to go find Metal.Bog finds Metal walking to his House & asks if he can help him & his friends find the killer Metal agrees to help.Bog brings Metal to see John & his friends they talk with him & tell him what they have heard about the killer Metal said that he heard the same.The second condition Bog asked was for Jade to help John declined because he & Jade don't get along but Bog said that the more people we have with us the easier it would be to find out who the killer is.John finally agrees to having Jade join them because they need Bog's help.Bog leaves to find Jade.During this time Jade along with Skarlet, Career, Cake ,& Fred also hear about the Killer they find out the killer targets certain people for different reasons at first Jade & the others think that John is the Killer but Bog sees Jade with the other & asks if she heared about the killer Jade informs Bog about what they know she also tells Bog that she thinks it's John that is the killer but Bog goes & says that John is also looking for the Killer with his friends.Bog asks Jade to help them find the killer she at first says no but her friends say to her that if we go with them we can find out if he is the killer by being with them so she agrees to help but only if her friends can come as well Bog accepts & says the more people the better.Bog asks Jade & her friends to come with him to His House where John & his friends are waiting for Bog to return.Bog returns to his house with Jade & her friends with him now with everyone there Bog comes up with a plan.He sends people to different locations in teams the First Team will have Bog, Cake, Fred, & Career the Second team will have Prince, Vap, Skarlet, & Metal & the Final Team will have John, Bya, & Jade they now wait till nightfall then they will head out to find the killer. That night everyone went to different locations that the Killer has killed at before the first was the Train Station,the Second Location was the Middle of Town,& the Third location is the Bridge that connects the Middle of Town to the Residential Area of Town the meeting location for all teams is the Bridge.The first team to get to there location was the Second Team they arrive at the Train Station were they Split up Prince & Vap jump down into the tracks while Skarlet waits at the Gate & Metal goes to check if another Train is supposed to come in.The Killer shows up & enters the control room in the Train station to lock both Prince & Vap on the track he succeeds in locking them both when a Train appears running over both Prince & Vap.The Killer then sets his sights on Skarlet who saw what happend she runs to find help but ends up getting lost the Killer finds Skarlet & Slashes her to death with a Machete.The Killer then sets his sight on the people in the Middle of Town. The second team to there location was the final team they make it to the Middle of Town but see nothing wrong so they were about to leave for the Bridge when Metal shows up saying that the Killer has killed Prince, Vap, & Skarlet the team of John, Bya, & Jade then ask him how did he get away Metal says he was Hidding in the Control Room at the Train Station so the Killer must not have seen him.Jade then sees blood dripping from Metal's hand she points it out to John & Bya who then say to Metal why is there blood dripping from your hand Metal then uses the Machete to cut Bya in the throat killing him.John & Jade run to a car not far from there current location with the keys in it they start the car but before they can even get the car to move Metal pulls out John from the car Stabbing John multiple times in the chest killing him Jade starts driving away when Metal trys to catch up to her.

Jade makes it to the other side of the bridge to tell Bog, Cake, Fred & Career that Metal is the killer, who shows up a few minutes later. Jade, using the car, rams Metal off the bridge. Jade, having jumped out of the car, before it collapses off the bridge and ablazes, did not see if Metal died, but hoped that the killings have come to a end. 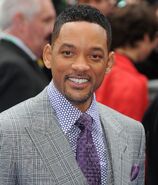 Will Smith as Bya