A young girl wears an amulet to use her powers to save the world from dangerous forces.

The movie opens with a 9-year-old Tabitha Smith (Avery Phillips) walked down to the woods and found an amulet. But, a stranger (Edward Norton) said everytime the person wears the amulet, it gives a supernatural powers. She was not amused as she walked away. Then, it moves forward to see Tabitha's dad, Mason Smith (Sam Worthington) in the ambulance about to going to hopsital after getting shot in attempted robbery at his house but he died from blood loss when the doctors fail to save him and trying to stop the bleeding. Mason's wife, Marisa (Kate Beckinsale) was left heartbroken and shocked to hear about Mason's death and was forced to tell Tabitha and Tyler (Tate Berney) about their dad's death that left them upset.

Tabitha took her time in girls' toilet before seeing her brother

Tabitha meet the Stranger after 7 years

Tabitha and Tyler recuse their dad from getting killed again

Mason reunite with Marisa when their kids watch

Tabitha take on The Stranger 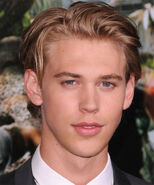 Kyle Robinson
Add a photo to this gallery

Original Film (Blue)
Add a photo to this gallery
Retrieved from "https://fanon.fandom.com/wiki/Mystical_(2015_film)?oldid=370793"
Community content is available under CC-BY-SA unless otherwise noted.