My Sister the Vampire: Switched is a 2015 film. This film stars Kira Kosarian and Amber Montana.

It features 13-year-old Olivia Abbott, and Ivy Vega. Olivia and Ivy meet each other and find out that they are identical twins because they each have identical emerald rings. Soon, however, Olivia finds out that Ivy is a vampire and Ivy finds out that Oliva is a half time lord.

About two thirteen-year-old 8th-grade girls, Olivia Abbott, who has just moved to Franklin Grove because of her dad's job, and Ivy Vega, a girl who's grown up in Franklin Grove. The girls find out that they're long-lost identical twin sisters who were adopted into different families when they were just a year old, and Olivia later finds out that Ivy's actually a vampire.

On Olivia Abbott's first day at Franklin Grove Middle School, she encounters a fashionably dress Goth girl who points her to the main office. The girl turns out to be Ivy Vega, who, upon running into Olivia, feels a strange sensation, as if she had met her before. While at the main office, Olivia meets and befriends Camilla Edmunson, a sci-fi obsessed blonde with long curly hair.

Ivy has a strong feeling of déjà vu upon seeing her again, and asks her best friend (since she was four), Sophia Hewitt, if they know her, to which Sophia replies, "She's 2 pink 4 us 2 know!" (it's also revealed that the vampire-slang term for a human is "bunny").

After class, Olivia's cornered by The Beasts, a gang of four greasy, creepy Goth boys, who call her "new meat" (their names are revealed to be Garrick Stephens, Kyle Glass, Dylan Soyle and Ricky Slitherman in the next movie). Ivy comes to Olivia's defense and fends off the goons, to which Olivia gratefully thanks her. Ivy's hit by a powerful wave of nausea mixed with strangeness, and rushes off before Olivia can finish talking (which Olivia feels guilty about because she thought she must have been coming on too strong).

Olivia meets and befriends Charlotte Brown and her two minions/best friends, Katie and Allison. Later at lunch, the three girls invite Olivia to sit at their lunch table, and Olivia reluctantly agrees, who had been hoping to sit with Camilla. Charlotte explains the "rules" of Franklin Grove Middle School, which mostly just revolves around her, the cheerleading captainship (which Ms. Barnett told Olivia wouldn't be decided until the actual tryouts), and the color pink (which they all love). As Ivy and her friends pass by their table, Charlotte makes a snide remark, but Ivy says nothing. Olivia's shocked and stands up for Ivy, but Charlotte dismisses Ivy, saying, "the walking dead don't have feelings!"

In science class, Ivy's annoyed that Olivia had seemingly been sucked into Charlotte's web so easily and was now her new BFF. Instead, Olivia comes up to Ivy's table and apologizes for Charlotte's insult and compliments her on her incredible style. Ivy admits to Olivia that she's used to petty ways, and that they're actually next-door neighbors. Ivy also reveals to Olivia that she actually tried out for cheerleading in 6th-grade and made the squad, beating out Charlotte, who was originally an alternative. Ivy eventually decided that cheerleading wasn't her thing, so she quit after the first week and joined the school newspaper (which is revealed to be called the Scribe in the second book) and Charlotte got to fill the spot Ivy left, which was apparently the only reason she actually made the squad in the first place (and she's never gotten over it).

While working on the lab experiment, Ivy notices the dark emerald ring on Olivia's middle finger and realizes that it's identical to the ring Ivy wears on her neck. The ring is the only thing Ivy has from her biological parents and was given it on her tenth birthday (Ivy had been adopted). After class, Ivy pulls Olivia to the science hall bathroom (which Ivy claims is the least frequented bathroom in the school) where they discuss their rings, their birthplace and birth date, their adoptive parents, and find out that they're identical twin sisters.

As the story progresses and Olivia and Ivy's sisterhood bonding grows stronger, they decide to switch places and fool everyone, sometimes for the fun of it, but also to fill in for each others' places in times of need. They switch places, everything from makeup to clothes and learning how to talk and act like each other---which wasn't easy, given that Ivy's low-profile goth (who doesn't like being the center of attention) with several close goth friends who use different terms like "suck" (meaning "good") and "deadly" (meaning "awesome"), and Olivia's a pink and perky cheerleader who doesn't mind being the center of attention and also bounces and smiles when she walks. Their eating habits are also a problem---Ivy's food always contains blood or strong iron content and absolutely no garlic, and Olivia's vegetarian who loves garlic (she's probably a pescetarian, because at the beginning of the story it's said that she likes sushi, which often has fish in it) and also loves tofu and salads. But the hardest part of switching identities is trying to fit in with the types of people the girls normally hang out with.

Olivia and Ivy face many other challenges as well after they meet: planning the All Hallows Hall (with Olivia pretending to be Ivy, who gets chosen as the head of decorations), Olivia badly wanting to make the Franklin Grove Middle School cheerleading squad (with Ivy pretending to be Olivia at the practices before the actual tryouts), Ivy really wanting to go out with bbbbbbb, her long-time crush (they start dating at the end of the book and are officially boyfriend-and-girlfriend by the second movie), and the two telling Ivy's best friend, Sophia, about the newly-discovered fact that they're definitely long-lost identical twin sisters.

Everything seems to go fine until Ivy finally tells Olivia that she's a vampire and proves so, and that Sophia and most of the other Goths in Franklin Grove are actually vampires, while the rest of the goths are "bunnies" just like Olivia. Olivia's obviously wierded out (and a little scared) when Ivy explains the existence of vampires, but starts getting used to it (the girls also question how they could be siblings if one of them is a vampire and the other's a human). 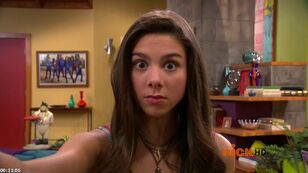 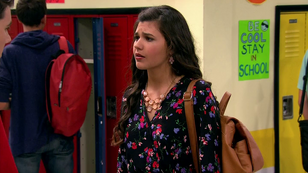 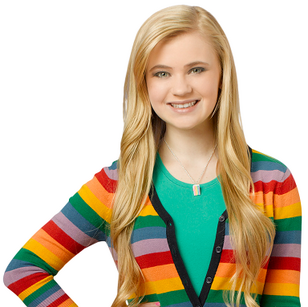 Camilla Edmunson
Add a photo to this gallery
Retrieved from "https://fanon.fandom.com/wiki/My_Sister_the_Vampire:_Switched?oldid=407627"
Community content is available under CC-BY-SA unless otherwise noted.