While the Avengers are away on a mission, Mockingbird is ordered by Nick Fury to protect New York when a new supervillain attacks the city.

The episode starts off with a man and his girlfriend walking out from a movie theater when a couple of street punks were going to rob them. As the punks were getting closer, Mockingbird swoops in to save the couple and taken down the street punk, one by one as she had the police to arrest them.

The next day, Mockingbird continues to watch over New York City by Nick Fury's orders while the Avengers are away on an intergalactic mission with the Fantastic Four.  She spots a break in at the local bank and heads down to investigate.

Inside the bank, a new villain named Dance Master is holding anyone inside hostage while his henchmen are stealing money from the vault. By the time they were about to exist the bank, Mockingbird had just arrived to stop them from getting away with the bags of money. Dance Master commands his henchmen to take the money into the truck, but it was too late because they were quickly defeated by Mockingbird. With his henchmen taking down, Dance Master then fights Mockingbird, utilizing dance moves and physical combat.

In the meantime, one of the henchmen uses a special ray gun to shoot a paralyzing at Mockingbird, causing her to freeze in place. Moments later at Dance Master's hideout, Mockingbird is taken to a disco dance room filled with a disco ball and rainbow floor tiles while her paralysis wears off. Mockingbird tries to figure a way to escape as Dance Master enters the room, plays on some disco music and began dancing the Saturday Night Fever. Before Mockingbird could attack, she starts mimicking the same dance uncontrollably. 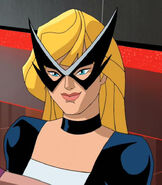 Add a photo to this gallery
Retrieved from "https://fanon.fandom.com/wiki/Mockingbird_meets_Dance_Master?oldid=456426"
Community content is available under CC-BY-SA unless otherwise noted.