Millie is an American drama film directed by Todd Haynes while being written and produced by Drew Gars. It stars Emma Watson, Jennifer Lawrence, Lena Waithe, Ben Barnes, Gwyneth Paltrow, Bill Murray, Sally Field, Ioan Gruffudd, Alexandra Daddario and Nathan Lane. The film follows an English lesbian leaving home after being shunned by her loved ones and starting a life in the United States but starts fighting for gay rights.

After coming out at her college graduation, Millie Chamberlain (Watson) leaves her home after a fight with her parents and her best friend is embarrassed of her. She heads to Amercia in Washington D.C. and settles down with a roommate named Sam (Lawrence), one day hoping she could be in California. But she notices a LGBT campaign called WeAreOne and decides to pledge herself to help LGBTs be equals with the public against those who oppose it, even at the cost of what happens in her personal life.

After hearing actress Emma Watson's speech for the HeforShe campaign and reviewing the 2014 historical film The Imitation Game, writer and producer Drew Gars (who supports Watson's campaign) was partially inspired to create a film about human rights. Emma Watson was in talks with Gars to be cast as the lead role, then later on, she was comfirmed for the role. Jennifer Lawrence also joined the cast to play the role of Millie's roommate and love interest, Sam Forester. Gwyneth Paltrow joined the cast, playing Emily Kendrew, the film's main antagonist.

In March, Ferris Bueller star, Matthew Broderick, who starred with Watson on the film, The Tale of Desperaux, joined the film as Jonathan Kendrew, Emily's husband. That same month, Bailee Madison, who is known for Jennifer Aniston's daughter in Just Go With It, joined the film as Janine.

In May, Bill Murray signed on to play Benjamin, Sam's father. In late May, Sally Field joined in to play Sarah Forester, Benjamin's wife and Sam's mother. In June, Ben Barnes joined the film as Sam's boyfriend.

Principal photography took 50 days, beginning on early September in Washington, D.C. and ending on late October in the University of Cambridge.

Professor: We here at The University of Oxford recognize great excellence and hard work, and because of that, without further a do, let's welcome one of our students, valedictorian Millie Chamberlain (the crowd applauds)

(Millie smiles and she walks up the stage towards the podium. Cut to Millie's parents applauding. Diane starts recording from her phone)

Millie: Thank you. As a former student at Oxford, it's been a great honor being able to attend this university. I was able to learn and grow, thanks to help of my professors and peers and I was able to pull through these past four semesters academically. I've had some struggles along the way, (Millie hesitates and looks down at her speech. She decides to go off-script) but there's also something about me that all of you should know-... (Millie takes a deep breath and slowly lets it out)... it's that I'm gay.

(The crowd gasps and murmurs. Garrett, Diane, and Shelley are shocked)

Millie's fight with her parents

Diane: Are you out of your fucking mind!?

Diane: Don't say a word! (paces around the room with her hand on her forehead) I don't know how to process this.

Garrett: Do you realize the grief you're causing me and your mother now? You announced this to a whole bloody crowd for God's sake!

Millie: Oh, so my sexuality embarrasses you?

Garrett: I didn't say that!

Millie: It clearly does.

Garrett: If we were embarrassed, we would've said something!

Millie: If you and Mum weren't embarrass, you wouldn't have reacted the way you did! (leaves the living room)

Millie: Well, I finished it! There you fucking go! ( storms in to her room)

Millie vs the Senators

Working Titles Films
Add a photo to this gallery 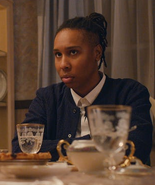 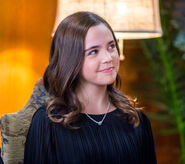 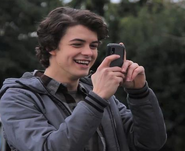 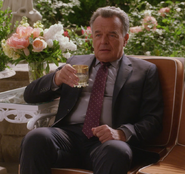 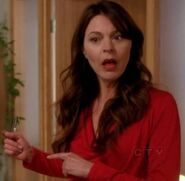 Garrett Chamberlain
Add a photo to this gallery

Retrieved from "https://fanon.fandom.com/wiki/Millie?oldid=484978"
Community content is available under CC-BY-SA unless otherwise noted.