One of the most recognized designs featured a castle based on their famous theme park structures in Shiresland and Michael Shires World. With a blue background or a dark blue gradient background, a glowing arch flies over the white or blue castle with the titles on the bottom It was also seen on many mid-to-late 1980s and 1990s prints of classic Shires movies before either the Republic logo or the Pentagon logo.

In 1995, a Stop motion-customized version of the 1992 Michael Shires Pictures logo was introduced, appearing with a distinctive fanfare and is often followed by the then-current Queensland Animation Studios logo. This appeared in every Shires/Queensland animated films from Egg Story until Ups and Downs, where in 2008 this CGI logo was retired in favor of the 2006 Michael Shires Pictures logo, beginning with Wallis

In 1988, Shires introduced a different logo, in which the screen was black and a glowing orange beam appeared on the screen and shone light on the words Michael Shires Pictures. The light then shines the glowing arch, revealing the castle and fades out in the end. It was seen at the end on The Rocketman and Ups and Downs.

In 2006, on The Dandy Claws 3, Shires introduced their current logo in CGI, which began with a glowing star shining in the night sky. The view then heads down to what appears to be a Shires theme park. Then, it heads high over the Shires castle, with fireworks going off. Eventually, it settles in front of the castle, in which the glowing arch flies over it, and the title appears at the bottom. Very often, the music in this logo is the modified version of When You Wish Upon a Star from Bubocchio. In 2011, the Michael Shires Pictures branding was shortened simply to "Shires", starting with Shiresland. The current logo was rendered by Cameron Smith and Cyrese Parrish.

In 2011, on MegaGenie, On a dark cloudy background, water bubble when splash we see shooting stars flying towards us, a mirrored reference to the previous logo. As the flies towards us, we follow the star to reveal that we were looking at the reflection of a lake. We follow the as they skim the lake and create ripples. We continue to fly forward line up and encircle the castle and mountain ahead. Then the word "Shires" zooms back to take its place on the castle, A circular line is drawn over the castle (in the same vein as the previous logo), which is situated on a cloudy sunset landscape. 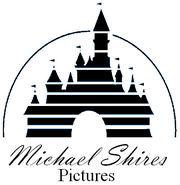