A Group of Collage Students decided to go on "Miami" for their field trip, when suddenly a naked man bites of a police man's half face and the police man started killing people which leads into a "Zombie Apocalypse" where the Students needs to escape from Miami or they will die like the others?

As Jordan, Bryan, Ashley, Vanessa, Travis, Karissa, Debbie, Megan and Chris are taking a look around Miami, they meet a girl name Eliza (Jennifer Lawrence) who was looking for her mother and want to know where she is. They don't know and Eliza keeps looking anyway.

The group enounters a group of Zombies where they where saved by Sherriff Carter (Owen Wilson) and Deputy Roberts (Nicholas D'Agosto). The group goes to a mansion and stay on their while Sherriff Carter and Deputy Roberts goes outside and fight those zombies. The Next day, a van arrive on the middle of a road and it was Bree (Cameron Diaz) and her Camera man, Brent (Arlen Escarpeta). Brent brings out his camera where he records Bree who was bitten in neck, Brent paniced where he rides on the van and he was bitten in arms which causes the van to crash and the van door crushed an zombiefied Bree. Jordan and Bryan was talking on the kitchen where Megan came where Megan hugs Bryan and Ashley became jealous and she pulls Megan's hair and both girls fight and was only stopped by Bryan.

Travis and Megan decided to make out at the garden where a zombie bites Travis and Megan runs to the mansion door and it was locked and she ends up being devoured by the two zombies. The Next day, Ashley wakes up where she see an zombiefied Megan and Travis and a zombie. Ashley screams where the group panics and they run while Dennis shoots at Megan and Travis. Brent, still alive, sees the group and runs for their help. The group goes to the balcony where Jordan, Bryan and Dennis decided to fight those zombies who get inside as soon as they realize if Brent was bitten he will became infected and Brent became a zombie and kills Debbie and they all ride on the van and hits those zombies and finds Sheriff Carter and Deputy Roberts and both rides on the van.

The group stopped on a construction site where Chris fights with the group and Chris leaves them. Chris then sees a little girl shivering. Chris goes up to little girl and finds that she is a zombie. The little girl zombie then tries to bite Chris as a group zombies swarms around her and she spots a gun and shots them. Jordan, Bryan, Ashley, and Karissa are secptical of Vanessa when she makes a plan to escape. Vanessa sneaks around where she gets seperated to them. Vanessa spots Deputy Ellis who is bitten, both Vanessa and Ellis escapes where Vanessa realized that Ellis will soon became a zombie and Vanessa decided to decapitate Ellis where a swarm of zombies attack them which leads to Vanessa's death.

Chris spots Ellis and she shot him in the head and as soon as she realized when she leaves Ellis is with David and a zombiefied David tries to bite Chris but she shots him which kills him. Jordan spots Eliza get attacked by zombies. Jordan kills the zombies and saves Eliza. He takes Eliza to the others. 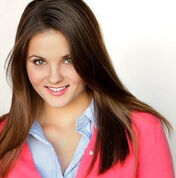 Police Man
Add a photo to this gallery

Police Man - Half face was eaten.

Megan - Devoured by Travis and Zombie.

Retrieved from "https://fanon.fandom.com/wiki/Miami_Apocalypse?oldid=82439"
Community content is available under CC-BY-SA unless otherwise noted.