Love Adventure is an American-French traditionally animated romantic dramedy TV miniseries created by Katrina Gehrig for The CC (Cartoon Comedy). It is part of The CC's yearly miniseries airing, in which a new miniseries airs every year on the channel. It aired on the week of June 5 - 9, 2017.

The miniseries focuses on Travis Hill (Jason Ritter), and his "quest" to conquer the heart of a girl named Alaina Moss (Grey DeLisle). 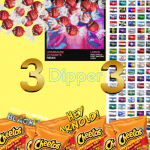