Kirby Air Ride ZG: Zero Gravity is the second Kirby Air Ride video game presented by Nintendo and developed by HAL Laboratory Inc. This video game is for the Nintendo Switch and it was released on March 6, 2020.

Kirby Air Ride ZG: Zero Gravity is played primarily through use of a vehicle, many of which are taken from previous Kirby games, such as the Warp Star. Players take control of Kirby and many other characters to compete in races or other mini-games. This game now features Zero Gravity controls such as the magnet which attracts the player to various places. Kirby, along with King Dedede and Meta Knight in the original Kirby Air Ride do not speak. But this game now enables Kirby and many others to speak in the game.

The simple controls are a defining feature of Kirby Air Ride. Unlike most racers, no input is necessary for the craft to move forward. Other than the use of the Control Stick to steer, the A button performs all other actions in the game, including braking, charging up for a boost, sucking in nearby enemies and thereafter using the powers absorbed from them. Some characters besides Kirby can use vacuums to absorb enemies. Gliding is also a definitive feature of the game, as the player can control the crafts' altitude when they go airborne.

Each of the three modes of the game has a "checklist" associated with it. These are 12x12 grids which contain 144 squares, all of which are initially blank. Each square has a hidden goal contained inside it, and certain goals also have unlockable content attached to them, such as alternate machines, new items and courses, new characters, and music tracks for the sound test. When a goal is completed, the squares fill to reveal completed goals. In practice, this system of discovering unknown goals is balanced out by several goals which are relatively easy to obtain, such as "finish a race three times" or "race on every course," and various other goals which only require the accrual of play time; these, in turn, make it easier to find out what other, more specific goals are, since each goal unlocked will open up the objective of the goals touching the goal completed.

Air Ride is a basic, back-view racing mode. The player chooses a racing machine and races against up to three other human or computer players via split-screen to get to the finish before anyone else. There are two ways to play a typical Air Ride race:

Laps
Laps is the default mode, where the player finishes the race by completing a set number of laps around the course. The number of laps can be custom set from 1 to 99, or kept at the track's default. The default number of laps may depend on the current course.
Time
In Time mode, players race for a set amount of time, and the player that goes the farthest down the track wins the match.

In both modes, Kirby and some other characters may suck up and acquire the abilities of enemies strewn along the track and use those powers against their rivals. Doing so will slow Kirby's enemies down and potentially do damage to them (if the Health Bar is activated for the race.)

In addition to the racing mode, Air Ride also has the option of Time Attack mode, where a single player races around a track for three laps. Lastly, a single player can also race Free Run mode, an endless race with the sole purpose of reaching the fastest possible Lap Time.

Top Ride is a racing mode on smaller, simpler tracks, and is viewed from above the track. Due to the decreased track size, the default number of laps is increased per track. Top Ride has only two vehicles to choose from; the red Free Star moves in the direction the Control Stick is tilted, while the blue Steer Star rotates clockwise or counterclockwise based on tilting the Control Stick right or left.

City Trial is a larger mode where players must navigate a city, along with several more sections such as a forest, cave, and volcano, while grabbing Air Ride machine upgrade items, such as boosts, top speeds, charges, offense, defense, and more. Various Air Ride vehicles are randomly scattered throughout the city, allowing the player to switch vehicles at any time in the game. Players can even collect rare machine pieces to fuse together into "Legendary Machines". This mode also features random events such as falling meteors, UFOs, Dyna Blade, rail station fires, bouncing items, fake power-ups, a strange pillar, a thief, all boxes containing the same items, dense fog, and more. When time expires, players face off in a small competition that tests how well your machine ended up, which can vary between a drag race, a brawl, a contest to destroy the most enemies, a gliding game, and even a lap on one of the Air Ride courses.

Kirby Air Ride ZG: Zero Gravity features a new mode where the player can complete missions and win cups to unlock new characters, courses and many more on the way.

Bosses in Vs. Boss

NOTE: These bosses can also be fought in Story Mode.

Kirby Air Ride has a DLC pack in which several Air Ride Machines have color schemes based on Soda brands. 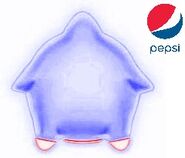 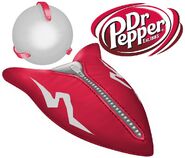 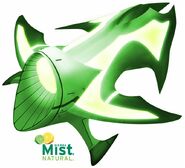 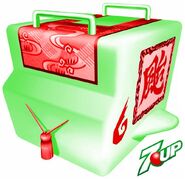 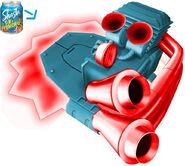 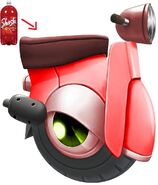 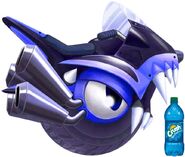 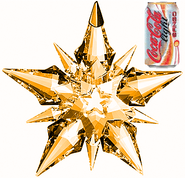 The character and machine select screen

The character and machine select screen, with all characters unlocked
Add a photo to this gallery
Retrieved from "https://fanon.fandom.com/wiki/Kirby_Air_Ride_ZG:_Zero_Gravity?oldid=532792"
Community content is available under CC-BY-SA unless otherwise noted.