Katie Quinn Lowes, born September 22, 1982, is an American actress. She is best known for her role as Quinn Perkins in the ABC political drama series Scandal (2012–present).

Lowes was born in Queens, New York City. She graduated from New York University's Tisch School of the Arts with BFA in acting, and later was cast in the stage play Four Saints in Mexico. In 2004, Lowes landed her first screen role in the FX series Rescue Me and later co-starred opposite Marcia Gay Harden in the Showtime pilot, Hate. Lowes later guest starred in the number of television series, including The Sopranos, Without a Trace, NCIS, Ghost Whisperer, Castle, Leverage, and The Closer. In 2008 she starred opposite Laurie Metcalf in The CW short-lived comedy-drama series, Easy Money. In addition to her television performances, Lowes appeared in a number of low-budget films, including The Job (2009), Bear (2010), and Café (2011). She voices Jeannie Sullivan, mother of Annabelle Sullivan in the TV series, Crossover Universe. 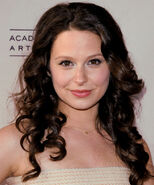 Retrieved from "https://fanon.fandom.com/wiki/Katie_Lowes?oldid=187113"
Community content is available under CC-BY-SA unless otherwise noted.