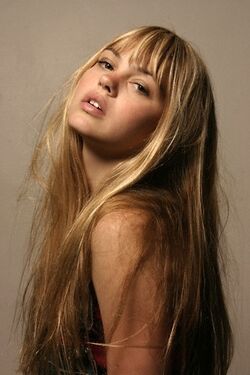 Her code-name as a Deadly Viper was Asp and she was the second on Beatrix Kiddo's re-done 1998 Death List.

She appears in Kill Bill: Vol.3 portrayed by Aimee Teegarden.

Jeanine Epper had begun as a struggling small actress living in a crappy apartment in Los Angeles, California trying to make it big.

She had tried everything and despite her greatest efforts and countless hours dedicated was unable to break into major film acting.

She had come to murder a major film executive working on a film which was in dire need of a lead female.

In murdering him she had been spotted by Deadly Viper Assassin Chingo Martinez who came to her and told her he has just the person who can get her what she wants and help her with her other talents as well.

Jeanine had then been taken to see a man named Bill whose charisma won her over and connections secured that breakthrough role which was her smoking gun.

The Assassination Of Peter Harmon + His Followers

Jeanine on January 27th, 1998 participated in the Assassination of Peter Harmon and his followers.

She was the radio patch in for Bill pin-pointing the exact locations he needed to be for in the take-downs.

She was spotted by Beatrix Kiddo in her last patch in before Beatrix was beaten senseless by Nox Janette and Chingo Martinez.

The Los Angeles Premiere of StarShine

Months following the Peter Harmon incident Jeanine had been informed of the death of Deadly Viper Ness at the hands of Beatrix Kiddo and Bill had warned Jeanine to not attend the large Los Angeles Premiere for her latest big movie.

She however ignored Bill's advice and attended the premiere.

Marked second on Beatrix's death list Beatrix also attended the premiere nicely dressed and engaged in combat with her.

Jeanine was killed as whilest locked in combat with Beatrix in the premiere building's large fountain she had her head smashed onto a granite edge then sliced all the way across the body by Beatrix's Komoto Sword lended by Master Sir Peterson.

Retrieved from "https://fanon.fandom.com/wiki/Jeanine_Epper?oldid=66394"
Community content is available under CC-BY-SA unless otherwise noted.