Invisible Point: Identity Target is 2018 cyber thriller film directed by Francis Lawrence and the film is the sequel to the 2016 film, Invisible Point.

Detective Jack Hardy helps Amanda Barrow, now graduated and an witness a murder in the hotel to stop her uncle, Toby Walker to carry his terror plan to New York but finds themselves getting closer.

The movie opens with 3 months later after the first film. With investigate the FBI agent, Jack Hardy (Dylan McDermott)'s ex-wife Helen Hardy (Cate Blanchett) and the most of detectives been kidnappped by FBI. The shooting left Hardy and the other detective injured and the FBI escape.

Amanda Barrow (Eliza Bennett) has been graduates from college and living a different life. On the eleventh anniversary of her older brother, Jake Barrow's death, when Amanda got distracted when looking at group of cheerleaders, Amanda gets hit by the car and the driver of the car is Samantha Matthews (Gwyneth Paltrow).

Amanda went to Helen's room and find Jack tie up

Jack and Amanda having arugment then end up with the kiss

David and Chloe find Amanda in the hot tube

Amanda tell David, she will keep his secret if he don't tell anybody about herself and Jack

Amanda meets Jake and meanwhile, Jack has trouble following the trace to the hackers

Jake, David and Amanda is caught by the police and the explosion

Amanda and David try to not let Jack, Martin and Joseph to see Jake

Jack and Amanda hide from the FBI

Amanda are shocked to see Jake in the doorstep

The battle between Amanda and Lily turn deadly 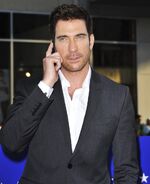 Lakeshore Entertainment
Add a photo to this gallery
Retrieved from "https://fanon.fandom.com/wiki/Invisible_Point:_Identity_Target?oldid=503831"
Community content is available under CC-BY-SA unless otherwise noted.