Start a Wiki
Season 1 of Injustice is the first season of the TV Adaptation. It will be aired on FOX and Netflix including the DC App. The plot is a retelling of what happened at the beginning of Injustice.

I used to be afraid. Afraid my powers would make people fear me. Afraid who I'd hurt if I wasn't careful every second of every day. I spent my whole life holding back. My fear cost me Lois. That's why I don't hold back anymore! ---Superman 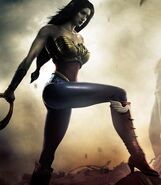 Add a photo to this gallery
Retrieved from "https://fanon.fandom.com/wiki/Injustice_(TV_Series_Adaptation)/Season_1?oldid=467783"
Community content is available under CC-BY-SA unless otherwise noted.