It's one year later after the events of Halloween 4. Michael survives the shootings and on October 31st he returns with a vengeance. Lurking and stalking, Jamie, Rachel, and Rachel's friends, Michael forms a plan to lure Jamie out of the children's hospital where events lead up to the confrontation at the Myers house. Halloween 5 is a dark, thrill ride that will scare the heck out of you!

Rachel Carrumers-stabbed in chest by michael

Mikey-stabbed in the head with a rake by michael

Deputy Charlie-stabbed in head with a pitchfork By michael

Deputy Nick Ross-stabbed in head with a pitchfork By Michael 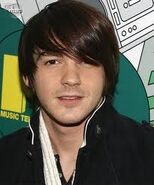 Deputy Nick Ross
Add a photo to this gallery
Retrieved from "https://fanon.fandom.com/wiki/Halloween_5_Remake?oldid=113425"
Community content is available under CC-BY-SA unless otherwise noted.